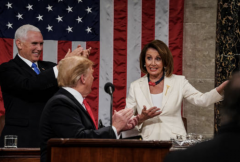 There is still another month left in fiscal 2020, which runs through the end of September.

The largest deficit the federal government had ever run through August before this fiscal year was the $1,659,890,630,000 deficit (in constant August 2020 dollars) it ran in fiscal 2009, during the last recession.

The most expensive federal department so far this year has been the Department of Health and Human Services, which spent $1,378,786,000,000 through August.

The second most expensive has been the Social Security Administration, which spent $1,056,912,000,000 through August.

The Treasury also spent $483,892,000,000 through Augsut in gross interest on Treasury debt securities.