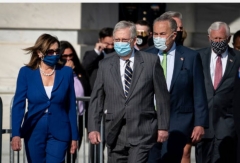 The table below from the Treasury Department's "Debt to the Penny" page shows the value of the federal debt at the close of business on each of the last twelve business days:

It then climbed another trillion dollars in just 35 days, topping $26 trillion for the first time on June 9.

Only 114 days elapsed from when the debt topped the $26-trillion threshold on June 9 to yesterday, when it topped $27 trillion for the first time.

The chart below shows the date on which the federal debt surpassed each trillion-dollar threshold from $5 trillion to $27 trillion: