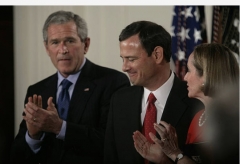 (CNSNews.com) - Chief Justice John Roberts said in an opinion published today--that concurred in part and dissented in part from the opinion of the court--that a Texas law that bans the abortion of unborn babies who have a detectable heartbeat is an “unconstitutional law.”

He also said that the threat posed by the civil suits the law authorizes “chills constitutionally protected conduct.”

"Texas has employed an array of strategems designed to shield its unconstitutional law from judicial review," Roberts wrote.

"These provisions, among others, effectively chill the provision of abortions in Texas," Roberts said.

"But by design," Roberts wrote, "the mere threat of even unsuccessful suits brought under S.B. 8 chills constitutionally protected conduct, given the peculiar rules the States has imposed."

The opinion of the court issued today in the case of Whole Women’s Health vs. Jackson did not address the fundamental question of whether it is constitutional for states to ban the abortion of unborn babies who have a heartbeat (which begins at about six weeks into gestation) but which Texas government officials an abortion provider can sue over the law.

This is a screen capture of Chief Justice John Roberts opinion in Whole Women's Health vs. Jackson.

The Texas law—S.B.8--is unusual in that it does not empower Texas government officials to take punitive action against an abortionist, but instead gives private citizens the authority to bring civil suits against abortionists or, as Roberts summarizes it "anyone who 'aids or abets,' or intends to aid or abet, an abortion performed after roughly six weeks."

In writing the opinion of the court, Justice Neil Gorsuch made clear that the case was not about whether the Texas law itself was constitutional.

“In this preliminary posture, the ultimate merits question—whether S.B. 8 is consistent with the Federal Constitution—is not before this Court,” wrote Gorsuch. “Nor is the wisdom of S.B. 8 as a matter of public policy.”

However, the court ruled that the abortion provider could sue the executive directors of the Texas Medical Board, the Texas Board of Nursing, the Texas Board of Pharmacy, and the executive commissioner of the Texas Health and Human Services Commission. “Each of these individuals is an executive licensing official who may or must take enforcement actions against the petitioners if they violate the terms of Texas’s Health and Safety Code, including S.B. 8,” Gorsuch wrote in the opinion of the court. “Accordingly, we hold that sovereign immunity does not bar the petitioners’ suit against these named defendants at the motion to dismiss stage.”

Justice Clarence Thomas disagreed with this part of the court’s opinion.

“Justice Thomas alone reaches a different conclusion,” Gorsuch said in the opinion of the court.

“Justice Thomas suggests that the licensing-official defendants lack authority to enforce S.B. 8 because the statute says it is to be ‘exclusively’ enforced through private civil actions ‘[n]notwithstanding…any other law.’”

In the concluding paragraph of his own opinion, Thomas stated: “I would instruct the District Court to dismiss this case against all respondents, including the four licensing officials, because petitioners may not avail themselves of the exception in Ex Parte Young. I join the Court’s opinion in all other aspects and respectfully dissent only from Part II-C.”

Chief Justice Roberts, as noted in the syllabus for the case, “filed an opinion concurring in the judgment in part and dissenting in part.” Roberts was joined in his opinion by Justices Stephen Breyer, Sonia  Sotomayor, and Elena Kagan.

“Texas has passed a law banning abortions after roughly six weeks of pregnancy,” Robert wrote in his opinion. “That law is contrary to this Court’s decision in Roe v. Wade, 410 U.S. 113 (1973) and Planned Parenthood of Southeastern Pa. v. Casey, 505 U.S. 833 (1992). It has had the effect of denying the exercise of what we have held is a right protected under the Federal Constitution.

“Texas,” Roberts continued, “has employed an array of stratagems designed to shield its unconstitutional law from judicial review.”

Roberts goes on to refer to aborting a baby with a beating heart as “constitutionally protected conduct.”

“But by design, the mere threat of even unsuccessful suits brought under S.B. 8 chills constitutionally protected conduct, given the peculiar rule the state has imposed,” wrote Roberts. “Under these circumstances, the court clerks who issue citations and docket S.B. 8 cases are unavoidably enlisted in the scheme to enforce S.B. 8’s unconstitutional provisions, and thus are sufficiently ‘connect[ed]’ to such enforcement to be proper defendants.”