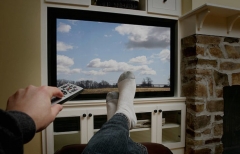 (CNSNews.com) - Americans on average spent more time per day watching television than they did working in the pandemic-hit period from May 10 to Dec. 31, 2020, according to the American Time Use Survey (ATUS) conducted by Census Bureau for the Bureau of Labor Statistics.

In the same May-to-December time period during 2019, according to BLS, the reverse was true: Americans on average spent more time per day working (3.25 hours) than watching television (2.74 hours).

On average, according to the pandemic-truncated survey that the Census Bureau conducted for BLS from May 10 through December 31, 2020. (That was a little more than the 8.84 hours per day on average spent on sleeping in the same period of 2019.)

The specific sub-category that is designated as “working,” BLS says, “includes hours spent doing the specific tasks required of one's main or other job, regardless of location or time of day. "

The term “work-related activities,” by contrast, includes “activities that are not obviously work but are done as part of one's job, such as having a business lunch and playing golf with clients.

“‘Other income-generating activities,’’ BLS says, “are those done ‘on the side’ or under informal arrangement and are not part of a regular job. Such activities might include selling homemade crafts, maintaining a rental property, or having a yard sale. These activities are those for which individuals are paid or will be paid.”

In May through December of last year, the 3.02 hours per day that Americans on average spent on the combined activities included under “work and work-related activities” was still slightly less than the 3.05 hour per day they spent on average watching television.

In a footnote to its report, BLS explains that the term “sleeping” includes “naps and spells of sleeplessness.”

In addition to sleeping (9.01 hours), watching television (3.05 hours) and engaging in work and work-related activities (3.02 hours), Americans on average also spent 1.07 hours per day in May through December last year eating and drinking. That was in addition to spending an average of 0.66 hours on “food preparation and cleanup.”

The activities that consumed the least amount of time, according to the survey, were “volunteering (organizational and civic activities)” and “caring for and helping nonhousehold adults,” which BLS said each took an average of 0.08 hours per day.

The activity that consumed the next-least amount of time, according to the survey, was “religious and spiritual activities.” These consumed an average of 0.09 hours per day.

“Religious activities include those normally associated with membership in or identification with specific religions or denominations, such as attending religious services; participating in choirs, youth groups, or unpaid teaching (unless identified as volunteer activities); and engaging in personal religious practices, such as praying,” the BLS explained.

From 2003 through 2019, the Census Bureau conducted the BLS American Time Use Survey through all twelve months of the year. However, the COVID-19 pandemic caused the bureau to change that in 2020.

“On March 19, 2020, Census temporarily closed its call and processing centers out of concern for the safety of the staff. Because of the closure, ATUS data collection and mailings paused,” said BLS in an explanation of the 2020 survey procedures.

“The average day measure reflects an average distribution across all persons in the reference population and all days of the week,” BLS explained. “The ATUS collects data about daily activities from all segments of the population age 15 and over, including persons who are employed and not employed.

“Activity profiles differ based upon age, employment status, sex, and other characteristics,” BLS said. “For example, during the period May 10th to December 31st, 2020, persons in the United States age 15 and over spent an average of 3.0 hours per day working. By comparison, on an average day they worked, full-time employed persons spent 8.1 hours working. Many activities typically are not done on a daily basis, and some activities only are done by a subset of the population.”

In both the 2019 and 2020 May-through-December periods, a much larger percentage of the people surveyed by the Census Bureau watched television than worked. But those who did work spent more time on average per day working than people who watched television spent watching TV.