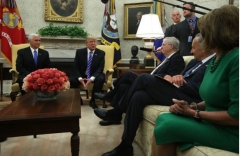 (CNSNews.com) - The federal government set records for the amount of money it spent and the size of the deficit it ran up in the first ten months of fiscal 2020 (October through July), according to data released today in the Monthly Treasury Statement.

In fact, the $5,630,859,000,000 the federal government spent in the first ten months of this fiscal year is more than the government has ever spent in any previous full fiscal year.

In October through July, the Department of Health and Human Services led all federal agency in spending. It spent $1,005,897,000,000 during the period.

(The numbers in this story were adjusted into constant July 2020 dollars using the Bureau of Labor Statistics Inflation calculator.)