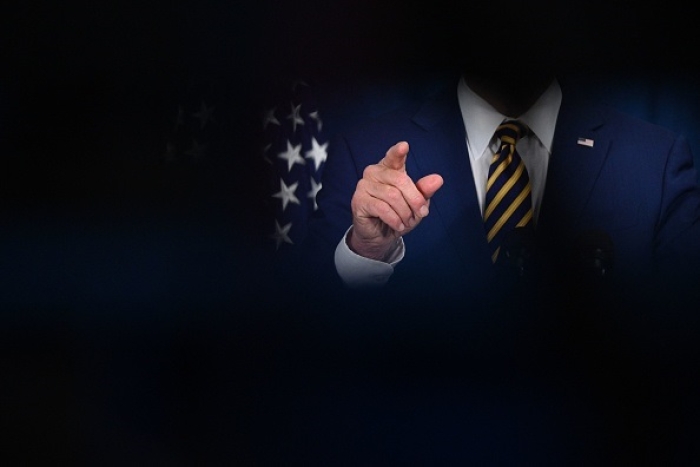 President Joe Biden speaks about the May 2022 jobs report in Rehoboth Beach, Delaware on June 3, 2022. (Photo by MANDEL NGAN/AFP via Getty Images)

(CNSNews.com) - As gasoline prices continue breaking records almost daily now, White House Press Secretary Karine Jean-Pierre suggested on Monday that Americans should be consoled by the fact that other countries are paying even more than we are.

"But we’re going to continue to do everything that we can. I don’t have anything to preview for you," Jean-Pierre said in the same breath. "But, you know, one thing also I want to say: The Rescue Plan has really been able to help us put — put us in a — in an economic — a place where we’re stronger."

But even President Biden once alluded to the inflationary pressure caused by the Democrats' $1.9 trillion American Rescue Plan.

Signed into law on March 11, 2021, the "rescue" act provided stimulus checks of $1,400 per person to millions of qualifying Americans. It also provided monthly payments of $250 to $300 per child to millions of families.

President Biden, speaking at the Port of Baltimore in November, acknowledged that because of him, "people have more money now," and that "creates a real problem" because with "more people with money buying product and less product to buy, what happens?...Prices go up," he said.

"But the answer ultimately is -- ultimately meaning the next three or four years -- is investing in renewable energy."

As for rising gasoline prices, President Biden has previously indicated he can't flip a switch to lower them.

"I must tell you, I don't have a near-term answer," Biden said in October. "There's a possibility to be able to bring it down, depends on -- a little bit on Saudi Arabia and a few other things that are in the offing."

More recently -- last Wednesday, in fact -- Biden said he's not "aware" of any "immediate action" that would reduce food and fuel prices.

"There’s a lot going on right now, but the idea we’re going to be able to, you know, click a switch, bring down the cost of gasoline, is not likely in the near term, nor is it with regard to food," Biden said after a meeting with baby formula manufacturers.

"[W]e can’t take immediate action, that I’m aware of yet, to figure out how we bring down the price of gasoline back to three dollars a gallon. And we can’t do that immediately with regard to food prices, either."

Biden said lower child care costs and lower prescription drug price could "compensate" for higher gas prices. "But we can compensate by providing for other necessary costs for families by bringing those down. That reduces the inflation for that family," Biden said.

Biden's three-part plan to ease inflation includes respecting the independence of the Federal Reserve, which uses interest rates as a brake on the economy; lowering prices other than gas and food for families; and raising taxes on the wealthy.

Here is the full transcript of Jean-Pierre's remarks on Monday, as well as the question that precipitated them:

Question: "On gas prices, I understand what the administration has done up to this point on the policy side of things.  I also understand it’s a global marketplace. Given the fact that they keep hitting new highs, are there new initiatives, new policy proposals that your team is working through right now that could possibly have an effect or that you could roll out in the weeks ahead if prices continue where they’ve been?"

"So, everything is on the table, as you heard us — as you heard us say the last couple of weeks.  But I do want to say: Look, you know, if you look at what happened when Putin started amassing troops on the border with Russia, the price of gas has increased by $1.51.

"And I also want to add — because this is really important so that people understand and flag that similar issues are happening around the world.

"This is — to your point, Phil — which is — this is a global challenge.  This is something that everyone is feeling across the globe. And — but we understand that prices — these gas prices, including food prices in particular — those two things, as we look at inflation and trying to make sure that we’re fighting inflation in every way that we can, is hurting families — is hurting families, especially as they sit around their kitchen table.

"But we’re going to continue to do everything that we can. I don’t have anything to preview for you. But, you know, one thing also I want to say: The Rescue Plan has really been able to help us put — put us in a — in an economic — a place where we’re stronger.

"And we saw that with the jobs numbers on Saturday — I’m sorry, on Friday — and that is an important thing to note as well.  Because when the President walked in — and this is — you know, this is something that we have to really continue to remember — we were in an economic crisis.

“And the President met that moment by putting forth the American Rescue Plan, by Democrats on the Hill voting for that plan, and really putting us in a place where we look at today in a much stronger economic situation where we can actually deal with inflation head on.

"We have a lot of work to do, and we understand what the American people is feeling, but we are in a stronger place to take that on."