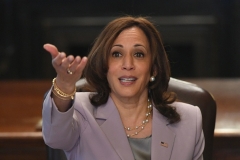 (CNSNews.com) - In an interview with CBS's "Face the Nation" on Sunday, Vice President Kamala Harris was asked what she views as "the biggest national security challenge" facing the nation. "What is the the thing that worries you and keeps you up at night?" Host Margaret Brennan asked her:

"Frankly, one of them is our democracy," Harris replied:

There is, I think, no question in the minds of people who are foreign policy experts that the year 2021 is not the year 2000. You know, I think there's so much about foreign and domestic policy that, for example, was guided and prioritized based on September 11, 2001.

And we are embarking on a new era, where the threats to our nation take many forms, including the threat of autocracies taking over and having outsized influence around the world.

And so I go back to our -- our point about the need to fight for the integrity of our democracy. In addition, it is obviously about what we need to do in the climate crisis.

Earlier in the interview, Harris said, "I believe that voting rights is one of the most significant issues that is facing us as individuals and as leaders today. There's no question, no question."

Harris said the Biden administration will "urge" Congress "to examine the tools they have available, to do what is necessary to fight for and retain the integrity of our voting system in America."

Democrats want the federal government to set the rules for elections, instead of leaving those rules to the states and local jurisdictions, as has been the case throughout our nation's history.

Republicans say such rules suppress the ability to cheat.