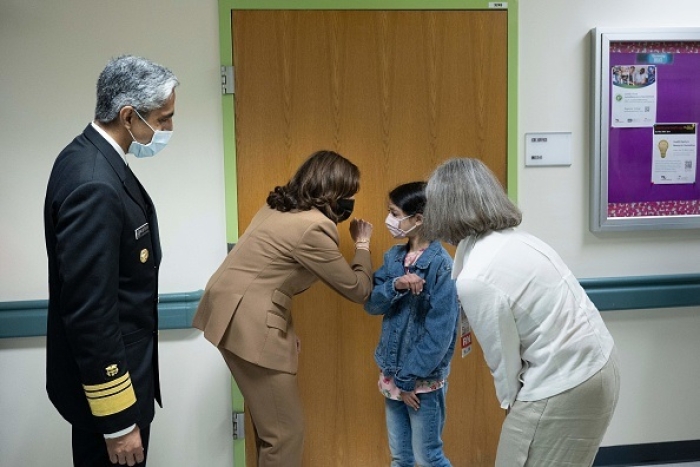 She praised the children's hospital as an "outstanding facility," and she took a few moments to thank the doctors, nurses, and staff who live "a life of service, and in particular, a life that is about our children and healing them, protecting them, and caring for them in the way that you do, in the way that I know is very personal."

She said children's issues are close to her own heart:

"And I will tell you, I — I — most of my career — in fact, all of my career — children have been one of my main areas of focus — what we can do to protect them, to keep them safe, to protect their well-being, and to nurture them in all the ways we know we have a responsibility as a society to do.

"When I was a young prosecutor many years ago, I saw firsthand how adverse childhood experiences can have a lasting effect on mental health.  And for decades, I have fought to improve children’s health and wellbeing.

"As District Attorney of San Francisco, I helped launch the Center for Youth Wellness to support children who were dealing with the effects of trauma.

"And as Attorney General of California, I launched a new bureau of the California Department of Justice that I named the Bureau of Children’s Justice to protect children from the types of trauma that can have lifelong effect.

"I believe that the work that you all do to help the children and families of this community and of our country is truly remarkable work.”

During his first months in office, President Biden named Harris as his point-person on illegal immigration at the Southwest border, where tens of thousands of unaccompanied children have crossed into the United States. She has never embraced the role.

During a trip to El Paso last June, Harris did meet with unaccompanied minors, "who are filled with optimism, but they are without their family," as she said at the time.

Apparently she did not see too many traumatized children -- those sad stories of children, some of them toddlers, abandoned at the border. Others are victims of human traffickers, who molest and abuse them.

"So, I met with the children — with the young girls.  And, you know, it was interesting.  They have obviously fled great harm.  They’re without their parents.  They are also full of hope.  They were asking me questions: 'How do you become the first woman Vice President?'

"And we can take all of these perspectives into account and have meaningful, good public policy if we just stop the rhetoric and the finger pointing and do what we need to do, including, as Chairman Durbin has been doing for years, agreeing that we need immigration reform in our country and that Congress must ask [sic] — act.  Let’s do the work of agreeing you can’t just react to a problem without solving it at its roots.  Let’s agree to that..."

U.S. Customs and Border Protection encountered 12,221 unaccompanied children/single minors in April alone. For Fiscal Year 2022 to date, there have been 85,688 such encounters.

And since January 2021, when Joe Biden became president, 132,559 unaccompanied children/single minors have come into this country.

Unaccompanied children are exempt from Title 42, and press reports say that is prompting some immigrant families who were expelled to Mexico to send their children on without them.

Homeland Security Secretary Alijandro Mayorkas told NBC's "Meet the Press" in March, "[W]e've made a decision that we will not expel young vulnerable children."

GOP Congresswoman: I Saw Girls Under 10 Who Had Been Gang Raped, Screaming So Loud Their Vocal Cords Gave Out