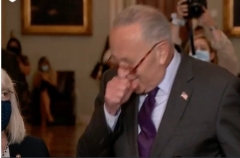 (CNSNews.com) - At the start of a Democrat leaders' news conference on Tuesday, Senate Majority Leader Chuck Schumer (D-N.Y.) sneezed, prompting Sen. Patty Murray (D-Wash.)--who was standing right next to him and in the direction that he sneezed--to ask him, "Where's your mask?"

“It's here in my pocket," Schumer said, explaining that he doesn’t have a cold (or COVID!): "It's sneezing from eating," he said.

Sen. Dick Durbin (D.-Ill.) who was standing behind Schumer--also not wearing a mask--stepped back and theatrically put one on after Schumer sneezed.

Here's how it went at the start of the news conference, as Schumer departed from the Democrat agenda to explain a "little known fact" about himself:

"There are four or five major items we must deal with that we discussed today in the caucus," Schumer began. "Voting rights and reconciliation, which we spent the most time on those two, particularly, reconciliation. Appropriations -- he paused, sneezing loudly into his fist.

"Excuse me, sorry," Schumer said, as Sen. Dick Durbin, standing with Schumer, made a show of putting on his own mask.

"It's here in my pocket, but I can't talk -- I actually, this is a little-known fact. After I eat, I sneeze often, and all the males in my family do it.

Schumer said the Senate has a "lot of work to get done, and we are moving forward on every issue."

For the record, here's another little-known fact:

According to the Healthline website, Schumer's condition is known as "Snatiation," which is a combination of the words "sneeze" and "satiation."

"It refers to a relatively common but poorly understood condition that causes people to sneeze uncontrollably after a large meal...Snatiation is likely genetic and doesn’t cause any health problems. If you notice that you sneeze more after large meals, try eating smaller meals or eating slowly."