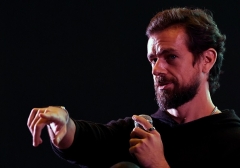 (CNSNews.com) - Twitter CEO Jack Dorsey told the Senate Commerce Committee on Wednesday that the policy of attaching labels to tweets, including some of President Trump's tweets, is intended to "provide more context, to connect the dots, so that people can have more information so they can make decisions for themselves."

Twitter slapped a “misleading” label on a recent Trump tweet warning of problems with mail-in ballots, then added a fact-check line reading, “Learn how voting by mail is safe and secure.”

Wicker noted that in March, a spokesman for the Chinese Communist Party falsely accused the U.S. military of causing the coronavirus pandemic. He said the tweet was up for two months before Twitter added a fact-check label.

"However, when President Trump tweeted about how mail-in ballots are vulnerable to fraud...Twitter immediately imposed a fact-check label on that tweet. Mr. Dorsey, how does a claim by Chinese communists that the U.S. military is to blame for COVID remain up for two months without a fact check, and the president's tweet about the security of mail-in ballots get labeled instantly?" Wicker asked.

"Well, first and foremost, as you mentioned, we did label that (Trump) tweet," Dorsey replied:

As we think about enforcement, we consider severity of potential offline harm. And we act as quickly as we can. We have taken action against tweets from world leaders all around the world, including the president, and we did take action on that tweet because we saw it, we saw the confusion it might encourage, and we labeled it accordingly...

The goal of our labeling is to provide more context, to connect the dots, so that people can have more information so they can make decisions for themselves. We've created these policies recently. We are enforcing them. There are certainly things that we can do much faster. But generally, we believe that the policy was enforced in a timely manner, and in the right regard.

Wicker noted that Twitter seemed to have no objection to leaving the Communist tweet up for two months without a label.

"Well, we did, and we labeled that tweet," Dorsey said. "I'm not sure of the exact time frame, but we can get back to you on that."

Wicker told Dorsey that Twitter also failed to label four tweets "glorifying violence" that were posted by the Iranian ayatollah. One of the tweets called the "Zionist regime" a "deadly cancerous growth" that would be "uprooted and destroyed." Others mentioned "firm armed resistance" to eradicate Israel, "jihad," and "the struggle to free Palestine."

These tweets are still up, Wicker noted. "And how is it they are acceptable...based on your policies at Twitter?" he asked.

Dorsey responded: "Well, we believe it is important for everyone to hear from global leaders. And we have policies around world leaders. We want to make sure that we are respecting their right to speak and to publish what they need, but if there is a violation of our terms of service, we want to label it, and--"

Wicker interrupted: "They're still up, do they violate your terms of service, Mr. Dorsey?"

"We did not find those to violate our terms of service, because we consider them saber-rattling, which is part of the speech of world leaders in concert with other countries.

"Speech against our own people or our country’s own citizens we believe is different and can cause more immediate harm," Dorsey said.