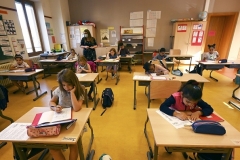 (CNSNews.com) - "We want to reopen the schools," President Donald Trump told a roundtable of educators, parents and medical people on Tuesday.

"Everybody wants it -- the moms want it, the dads want it, the kids want it -- it's time to do it. You know, our mortality rate is right now at a level that people don't talk about -- but it's down tenfold -- tenfold."

Trump noted that young people are not seriously impacted by the virus that mostly kills the elderly or people with underlying conditions.

He predicted that by the fall, "it's going to be a much better climate than it is right now," adding that "we're on the right side of things."

“We’re very much going to put pressure on the governors and the schools to reopen,” Trump said. “Open your schools in the fall,” he repeated.

Trump's call to reopen schools sets up a clash with a staunch Democrat constituency, the teachers unions.

The AFT has endorsed Joe Biden.

On Tuesday night, Education Secretary Betsy DeVos told Fox News's Tucker Carlson, "There is no excuse for schools not to reopen again and for kids to be able to learn again full time. The data doesn't suggest anything different. The medical experts aren't suggesting anything different...

“This is more an issue of adults who are more interested in their own issues then they are about serving their students. It's very clear that kids have got to go back to school."

Carlson asked DeVos if the Trump administration can withhold federal funding for schools as a way to force their reopening:

Well, that's definitely something to be looked at. The reality is, most of the education funding as you know comes from the state and local level. So in excess of 90% of it does. But what the president and all of those at a round table today made very clear is the expectation that kids have got to continue their learning. There is no other reason to withhold education -- full-time education.

DeVos said she believes the pandemic, and the school closures, have made parents more aware of what's going on in their children's schools -- or what isn't going on.

She said the option given to some parents in Fairfax County, Virginia -- a choice of sending a child to school for a two days a week or no days -- is "not a choice, that's a pretense of a choice. So more and more families are at a point of demanding that their kids could be able to continue to learn and they want more options and choices for their kids, too."