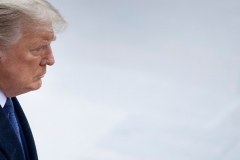 (CNSNews.com) - "This election was rigged. This election was a total fraud," President Donald Trump told "Sunday Morning Futures" with Maria Bartiromo. He placed much of the blame on a media "that doesn't even want to cover it."

"But it's a situation, the likes of which -- we don't have freedom of the press in this country. We have suppression by the press. They suppress. You can't have a scandal if nobody reports about it.

Trump said "everybody" thought the election was over, ending with a Trump victory, by 10 p.m. on election night. "And then the phony -- then the phony mail-ins started coming in, Maria...Glitches started happening."

Trump repeated that the election was "rigged."

He also criticized judges who have ruled against his legal team, in some cases, for lack of standing:

Well, we're trying to put the evidence in. And the judges won't allow us to do it.

We are trying. We have so much evidence. We -- you probably saw, on Wednesday of last week, we had a hearing in Gettysburg, Pennsylvania. It was an incredible hearing, unbelievable witnesses, highly respected people, that were truly aggrieved.

Trump also pointed to poll watchers who weren't allowed to watch the vote counting in progress.

"We have pictures and we have evidence of new ballots being brought into counting rooms," Trump said:

Maria, there's never been anything like this in history. And it all started with the mail-in. But it also goes to Dominion (voting system). It goes to a lot of things. But the mail-in, millions and millions of ballots being shipped all over, and ballots -- as you know, there were a lot of ballots where it was just Biden on top. They didn't do anything else, because they were in a rush.

And from what everybody is saying, and from what -- I don't think we even have to prove this. They say that I was doing so much better than they thought that they panicked, and they started just doing ballot after ballot very quickly and just checking the Biden name on top. They didn't have time.

Trump said much of the problem involved mail-in voting: "What kind of an election is this? What kind of a country are we living in now, where you can vote for months ahead of schedule?" he asked.

He said some of the late-arriving ballots were "backdated” -- "and we have affidavits on that, too."

“I look at what's going on. It's so terrible. But what happened in this election, Maria, I can't imagine has ever happened before. They stuffed the ballot boxes.