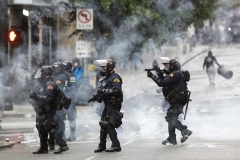 Police use tear gas after protests turned destructive in Seattle, Washington on May 30, 2020. The furious and violent backlash over George Floyd's death was repeated in other cities. (Photo by JASON REDMOND/AFP via Getty Images)

(CNSNews.com) - When it comes to crime, some of America's Democrat-run cities are "out of control," and President Trump plans to do something about it, he said on Wednesday.

"We're going to straighten things out," he told a press briefing where he announced recent moves against MS-13 gang members.

"You'll be seeing next week. We'll have a conference next week, and we'll tell you in great detail. But it's something that I think at this point the American people want to see. They've been run very poorly, these cities..." The president specifically mentioned Seattle and Portland, Oregon.

Trump told reporters, "the left-wing group of people that are running our cities are not doing the job that they are supposed to be doing, and it's not a very tough job to do if they knew what they were doing.

"So we will be talking about that next weekend, probably have an announcement as to what we are planning to do to help them. They are supposed to be asking for help, and they don't want to ask, so maybe they are proud or maybe they think it's bad politically, but we can't have happen what is happening."

Trump said some American cities are like "war zones."

"And if the city isn't going to straighten it out, if local politicians, or in this case--I don't say this, but for political reasons, they're all Democrats. They are liberal, left-wing Democrats, and it's almost like they think this is going to be this way forever, where in Chicago 68 people were shot and 18 died last week.

"It's named after a 4-year-old boy (LeGend Taliferro) who was killed in Kansas City," Kupec said. "As he was sleeping in his bed, a stray bullet hit him. The homicide rate in Kansas City right now is the highest it's ever been.

"And so, we launched Operation Legend, naming it after this child who was tragically killed. And what it means is, we are surging that city as we speak with federal assets and agents -- ATF, DEA, FBI -- to come alongside local law enforcement there and help them deal with this terrible violent crime issue that they are currently experiencing."

Fox News's Bill Hemmer asked Kupec about Portland, Oregon, where people, some of them violent, have been protesting for six weeks.

Today the Acting Secretary of Homeland Security asked to speak with me about demonstration activity in Portland. He expressed his concern about ongoing violence and asked how his agency can help.

The best thing they can do is stay inside their building, or leave Portland altogether. Our goal is to end these violent demonstrations quickly and safely. And in the meantime, I asked him to clean up the graffiti on local federal facilities.

Kupec would not say if Operation Legend will apply to Portland, whose mayor she called a "disgrace."

Well, I don't want to get ahead of the cities that we will be surging in the coming weeks, and we will be making that announcement, as the president said, next week, as to which cities we're going into.

But I've got to tell you, Bill, I was particularly dismayed by the comments made by that Portland mayor considering that just over the weekend a protestor went after one of our U.S. Marshals with a hammer, hitting him over and over and over again. Protestors were surging federal buildings. They were armed with sledgehammers, with slingshots, with lasers.

And the fact that you have elected officials - and I don't care if you're Republican or Democrat, but if you are an elected official and you are prioritizing your own personal politics and violent anarchists and agitators over the safety and security of the very people who elected you, that's not leadership. That's a disgrace.

Kupec said federal authorities made ten arrests over the weekend in Portland:

"We charged 10 cases. In Seattle yesterday, we arrested and charged a case with an individual who had set fire to a Seattle police precinct, right outside the then-CHOP zone there as well, which if anyone's taking notes, brings our grand total up to almost 200 both charged cases and arrests nationally, with offenses ranging from destruction of federal property, monuments, and also assaulting federal law enforcement officers."

In his July 8 announcement, Attorney General Barr said the federal government “stands ready and willing to assist any of our state and local law enforcement partners across the nation responding to violent crime.”

As part of Operation Legend, Attorney General Barr directed federal agents from the FBI, U.S. Marshal Service, DEA and ATF to surge resources to Kansas City in the coming weeks to help state and local officials fight the surge of violent crime.

They will be working alongside state and local law enforcement agencies. Department of Justice assets will include over 100 FBI agents, U.S. Marshals, DEA agents, and ATF agents.