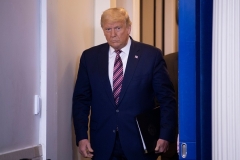 Trump said the expansion of unsolicited mail-in ballots is the main problem with this election:

Democrat officials never believed they could win this election honestly. I really believe that. That's why they did the mail-in ballots where there's tremendous corruption and fraud going on. That's why they mailed out tens of millions of unsolicited ballots without any verification measures whatsoever.

And I've told everybody that these things would happen because I've seen it happen. I watched a lot of different elections before they decided to go with this big massive election with tens of millions of ballots going out to everybody, in many cases totally unsolicited. This was unprecedented in American history.

This was by design, despite years of claiming to care about the election security. They refused to include any requirement to verify signatures, identities, or even determine whether they're eligible or ineligible to vote. People are walking in there, they have no idea. They're just taking numbers. They're writing down things, the workers, and doing a lot of bad things. And we have a lot of information coming and litigation that you'll see that will shake even you people up (the media), and you've seen it all.

Trump pointed to "a number of disturbing irregularities" in the vote-counting, including:

-- A "corrupt Democrat machine" in Pennsylvania and other key states;

-- Extended deadlines for accepting mailed ballots in Pennsylvania and other states;

-- Batches of ballots coming in late in Detroit, "and nobody knew where they came from."

Trump challenged Joe Biden and every Democrat to clarify that they only want "legal" votes counted.

Trump said he's filing lawsuits "because we can't have an election stolen like this."

Trump expressed the hope that things will be cleared up, "maybe soon."

"But ultimately, I have a feeling judges are going to have to rule. But there's been a lot of shenanigans, and we can't stand for that in our country.