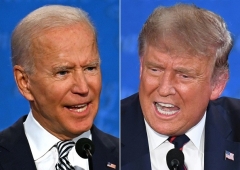 Former Vice President Joe Biden and President Donald Trump apparently won't meet in person at their next scheduled debate, if there is one. (Photo by Jim Watson/AFP via Getty Images)

(CNSNews.com) - The Commission on Presidential Debates announced Thursday morning that, "In order to protect the health and safety of all involved," the scheduled October 15 event "will take the form of a town meeting, in which the candidates would participate from separate remote locations."

It will be a virtual debate, in other words.

According to the debate commission, "the town meeting participants and the moderator, Steve Scully, Senior Executive Producer & Political Editor, C-SPAN Networks, will be located at the Adrienne Arsht Center for the Performing Arts of Miami-Dade County in Miami, Florida. The White House Pool will provide coverage of the second presidential debate."

Forget about it, the Trump campaign's Bill Stepian said in a statement:

President Trump won the first debate despite a terrible and biased moderator in Chris Wallace, and everybody knows it. For the swamp creatures at the Presidential Debate Commission to now rush to Joe Biden’s defense by unilaterally canceling an in-person debate is pathetic. That’s not what debates are about or how they’re done.

Here are the facts: President Trump will have posted multiple negative tests prior to the debate, so there is no need for this unilateral declaration. The safety of all involved can easily be achieved without canceling a chance for voters to see both candidates go head to head. We’ll pass on this sad excuse to bail out Joe Biden and do a rally instead.

President Trump called in to "Mornings With Maria" Thursday morning:

"No, I'm not going to waste my time on a virtual debate," Trump said. "That's not what debating's all about. You sit behind a computer and do a debate, it's ridiculous. And then they cut you off whenever they want."

Marc Short, the chief of staff for Vice President Mike Pence, happened to be on CNN's "New Day" Thursday morning when news broke about the plan for a virtual "town hall" debate:

"I think our concern consistently has been the debate commission is supposed to negotiate with both sides if they are going to suggest a change in rules and that has not been the case," Short said.

"We are hopeful they will actually enter into negotiations so we can hear what their concerns are and there can be a negotiation to hopefully reach a positive settlement, because we think it's important that the American people hear from both candidates."

The fact that the president is now recovering from COVID shouldn't be a stumbling block, Short indicated, since the debate is a week away: