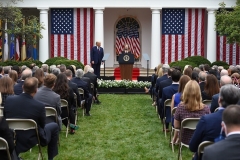 (CNSNews.com) - Steve Cortes, a senior adviser to the Trump Campaign, is pushing back on criticism that President Donald Trump was careless, even reckless, in exposing himself and the people around him to coronavirus.

"He could have been hermetically sealed in the residence and been practically guaranteed that he wouldn't get the virus, but instead, he took reasonable risks, not reckless ones, but reasonable risks," Cortes told "Fox News Sunday" host Chris Wallace.

"Steve, people packed together, the vast majority not wearing masks, how does that make sense?" Wallace asked him:

Tremendous precautions are taken to protect the president, as you well know. Anybody who goes to see the president must submit to a COVID test first and also there is significant distancing. People don't physically get close to the president, at least people who don't have to.

Of course his family members, some of the security detail, that's a different story, but I think given these precautions and given that he is probably the most protected person on earth, the fact that he still got infected shows us that unfortunately this virus has that kind of power, that kind of communicable ability.

And the president though, and he's made this clear, he was unwilling to completely sequester himself to take no risk because leaders take risks and he is the servant of the people as well as the commander-in-chief so he said he must be around the people he serves.

And he knew that it was not riskless for him to do so. He could have been hermetically sealed in the residence and been practically guaranteed that he wouldn't get the virus, but instead, he took reasonable risks, not reckless ones but reasonable risks.

Unfortunately he got the virus, and I think what this shows us for a policy perspective, I think this is important, Chris, is that we know that even the most severe of lockdowns cannot completely stop the virus. Therefore, we should take reasonable precautions, as a society, and we should not, as Joe Biden threatens, even think about shutting this economy and this society down again.

Cortes said he and other senior campaign staff spoke to the president on Saturday by telephone:

"He was as upbeat and assertive as he's ever been. And then we also know what the rest of the world saw, which was that terrific video of Donald Trump, the fighter, speaking directly to the American people extemporaneously for four minutes, looking good, sounding good and, of course most importantly of all, we know what his doctors said, which is that his progress has been incredible.

"So this president is going to recover. We are highly confident of that and, again, he is a fighter in every sense of the word, and he's doing really well."