Trump Campaign Adviser: Biden Must Answer 'Simple Questions' About Corruption at Next Debate 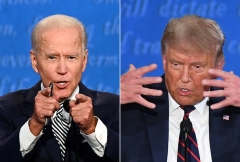 Trump and Biden faced off in Cleveland on Sept. 29. (Photo by JIM WATSON,SAUL LOEB/AFP via Getty Images)

"Well, if Kristin Welker, the moderator, doesn't bring it up, I think you're pretty safe to assume that the president will," Miller told Maria Bartiromo on Monday:

And again, these are real simple questions that Joe Biden needs to answer to the American public. And keep in mind this is also supposed to be a debate on foreign policy. I know the debate commission is now trying to move the goal posts yet again and work in a bunch of other issues.

Miller laid out the simple question, as follows:

"Real basic, former vice president, are you 'the Big Guy'? Are you the chairman? Is Hunter Biden handling family expenses and setting aside money for you? It's a yes or no question."

One of the emails recovered from what is believed to be Hunter Biden's laptop refers to "the Big Guy" who would get a 10 percent share in a deal with a Chinese energy company, press reports said. Sources told Fox News that the person identified only as "the Big Guy" is the former Vice President.

The Biden campaign has not denied that the emails came from Hunter's laptop, which was left at a Delaware repair shop, despite attempts by the owner to reach Hunter Biden. The laptop and hard drive are now with the FBI.

President Trump tweeted about Biden's "corruption" several times over the weekend, as follows. The president also raises the allegations at his daily campaign rallies:

-- "Very proud of the @nypost, my former “hometown newspaper”. They have said and shown what everyone knows about Sleepy Joe Biden. He is a CORRUPT POLITICIAN!!!

-- "Joe Biden is a corrupt politician, and everybody knows it. Now you have the proof, perhaps like never was had before on a major politician. Laptop plus. This is the second biggest political scandal in our history!"

-- "Hunter Biden’s laptop is a disaster for the entire Biden family, but especially for his father, Joe. It is now a proven fact, and cannot be denied, that all of that info is the REAL DEAL. That makes it impossible for “50%, or 10%” Joe, to ever assume the office of the President!"

Miller told Bartiromo on Monday, "Biden is a 47-year fixture in the swamp here in Washington, D.C. This is a big part of the reason why voters rejected Hillary Clinton in 2016, why they're going to reject Joe Biden in 2020.

“Voters are sick and tired of our politicians going to Washington, getting elected and getting themselves and family members rich, selling access to their office while other people get left behind.”

Miller agreed that there are "some serious national security issues" involved here: "I think Joe Biden is compromised, he's clearly compromised by the Chinese, if not multiple other government," Miller said.

Biden is not making any public appearances until Thursday.