Trump Asks, Was Today's Never-Trumper Witness 'On the Same Call I Was?' 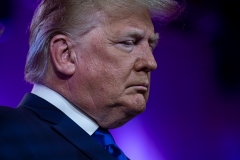 (CNSNews.com) - As people inside his own administration rise up against him, President Trump is fuming about it on Twitter.

"Supposedly, according to the Corrupt Media, the Ukraine call 'concerned' today’s Never Trumper witness," Trump tweeted Tuesday morning. "Was he on the same call that I was? Can’t be possible! Please ask him to read the Transcript of the call. Witch Hunt!"

The president issued several other tweets, as follows:

How many more Never Trumpers will be allowed to testify about a perfectly appropriate phone call when all anyone has to do is READ THE TRANSCRIPT! I knew people were listening in on the call (why would I say something inappropriate?), which was fine with me, but why so many?

The Do Nothing Democrats are working hard to make everyone forget the Best Economy Ever, the monumental weekend raid, Tax Cuts, the Rebuilding of our Military, etc. The Impeachment Hoax is a disgrace. Read the transcript!

Where’s the Whistleblower? Just read the Transcript, everything else is made up garbage by Shifty Schiff and the Never Trumpers!

Trump also retweeted Fox News's Laura Ingraham, who noted that when he took office, Trump had "zero idea" how many career staffers working inside his administration "would be working 24/7 to undermine his agenda."

The summary of Trump's phone call with Ukraine President Zelensky can be read here in its entirety.

At the beginning of that call, President Zelensky told Trump, "[W]e are trying to work hard because we wanted to drain the swamp here in our country. We brought in many many new people. Not the old politicians, not the typical politicians, because we want to have a new format and a new type of government .. You are a great teacher for us and in that."

The "swamp" that Trump supposedly drained is now rising up against him, with the full support of Democrats and the liberal media.

The part of the phone call that sent Democrats into impeachment overdrive was this:

Biden bragged that he used a billion-dollar loan guarantee as leverage to get a Ukraine prosecutor fired. Biden denies the firing had anything to do with his son Hunter's position on the board of a Ukraine gas company.

Here is what Joe Biden told the Council on Foreign Relations in 2018, as he reminisced about his 2016 visit, as sitting vice president, to Ukraine:

And I went over, I guess, the 12th, 13th time to Kiev. And I was supposed to announce that there was another billion-dollar loan guarantee. And I had gotten a commitment from Poroshenko and from Yatsenyuk that they would take action against the state prosecutor. And they didn’t.