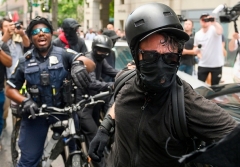 Antifa radicals wore black masks long before the COVID-19 pandemic. This radical was photographed in Washington, D.C., in July 2019. (Photo by ANDREW CABALLERO-REYNOLDS/AFP via Getty Images)

(CNSNews.com) - "The United States of America will be designating ANTIFA as a Terrorist Organization," President Trump tweeted on Sunday.

Echoing the president on Sunday, National Security Advisor Robert O'Brien told ABC's "This Week" with George Stephanopoulos that Antifa (far left anti-fascists) are to blame for the eruption of violence in American cities.

It's the violent Antifa radical militants that are coming out, under cover of night, traveling across state lines, using military-style tactics to burn down our cities. And they're especially targeting the most venerable parts of our cities, George. The minority section, the African-American sections and Hispanic areas and burning down businesses of people that are trying to get a leg up.

And -- and the president's outraged by that. And we all are. And -- and that has to stop. And we're calling on the FBI to investigate Antifa and -- and get to the bottom of these -- these violent rioters. And I don't want them confused with peaceful protesters that have every right to go out to the streets. That's -- that's what makes America different from any other countries around the world.

Stephanopoulos mentioned reports that it's "not just Antifa and the left," but also the "far right as well."

"Well, listen, everything I've seen in -- and that we're being reported were -- the reports we're receiving is that this is ANTIFA. They're crossing state lines," O'Brien responded:

And we've seen this happen before. We saw it in Portland. We saw it in Seattle. We saw it in Berkley. So, look, we'll keep our eyes open for anyone else that wants to take advantage of the situation, whether it's domestic or foreign.

But right now I think the president and Attorney General want -- Barr want to know what the FBI has been doing to surveil, to disrupt, to take down ANTIFA, to prosecute them. This isn't the first time they're out there and they're using military-style tactics and traveling around the country to take advantage of these situations and burn down our cities. And -- and that can't be tolerated.

So the FBI has got to come up with a plan to deal with Antifa. This is not the first time that they've engaged in this activity. It needs to stop. I mean they're throwing bricks at park police and -- and uniformed Secret Service officers.

I know you know a lot of those guys, George, from when you worked here. These are good men and women who are trying to protect the White House and there are great police men and women around the -- around the country that are being attacked.

There was an officer, a federal protective service officer was shot in Oakland. And our hearts and our prayers go out to him and his family, Patrick Underwood. This Antifa violent activity has to stop and we need to get to the bottom of it. We're calling on law enforcement to do it.

President Trump on Sunday retweeted something from Tom Fitton, head of Judicial Watch, who said: "Antifa has been engaging in terrorism and seditious conspiracy for years. But FBI and DOJ were too busy to care much, their leadership engaging in their own seditious conspiracy against the presidency @RealDonaldTrump. Glad to see that AG Barr is beginning to get back to basics."

O'Brien said he condemns extremists on the right and the left: "But the ones who are out on the streets throwing the Molotov cocktails and attacking our police, who are acting with -- you know, for the most part, with restraint, and heroically, you know, that has to stop."

O'Brien did make a distinction between violent radicals and peaceful protesters, whom he called "great Americans."

"And that's the difference between our country and many of the authoritarian countries out there, when something like this happens, we investigate it. Our people protest. They petition their government for redress. And we stand with the protesters."

In a statement issued on Sunday, Attorney General William Barr said federal law enforcement will apprehend and charge "the violent radical agitators who have hijacked peaceful protest and are engaged in violations of federal law.

"The violence instigated and carried out by Antifa and other similar groups in connection with the rioting is domestic terrorism and will be treated accordingly."