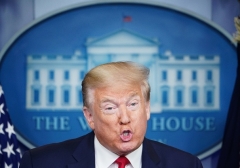 "They fact-checked him, Laura, for his opinion, and by the way, his opinion was based on fact, because the Democrats are trying to steal this election. I just tweeted out that the Democrat plan to have everyone vote by mail is an invitation for fraud, and it's a total scam," Patrick said.

President Trump told a news conference on Tuesday,"When you do all mail-in voting ballots, you are asking for fraud."

Earlier on Tuesday, the President tweeted much the same thing, drawing an unprecedented response from Twitter.

"There is NO WAY (ZERO!) that Mail-In Ballots will be anything less than substantially fraudulent. Mail boxes will be robbed, ballots will be forged & even illegally printed out & fraudulently signed. The Governor of California is sending Ballots to millions of people, anyone living in the state, no matter who they are or how they got there, will get one. That will be followed up with professionals telling all of these people, many of whom have never even thought of voting before, how, and for whom, to vote. This will be a Rigged Election. No way!"

In a historic first, Twitter commented on Trump's tweet, posting a message below it, saying, "Get the facts about mail-in ballots."

Twitter indicated that Trump's claims are unsubstantiated, according to CNN, The Washington Post, and other media outlets that are actively working for Trump's defeat in November.

Twitter's interference prompted more tweets from the president on Tuesday:

"@Twitter is now interfering in the 2020 Presidential Election. They are saying my statement on Mail-In Ballots, which will lead to massive corruption and fraud, is incorrect, based on fact-checking by Fake News CNN and the Amazon Washington Post. Twitter is completely stifling FREE SPEECH, and I, as President, will not allow it to happen!"

Trump was still tweeting about the "fact-checking" on Wednesday morning, writing:

"Twitter has now shown that everything we have been saying about them (and their other compatriots) is correct. Big action to follow!"

Lt.-Gov. Patrick, meanwhile, is urging Americans to do some tweeting of their own "about how mail-in ballots are a scam by the Democrats."

"Let's see if Twitter fact-checks me and the millions of  people -- remember that movie, "Network," when Howard Beale said, go to the window and just shout out, you're mad as hell and you're not going to take it anymore? Well, the modern-day is, go to your computer -- millions of tweets, how the Democrats plan -- you write your own tweet, folks, send it out and let's see if Twitter goes after them like they went after the president.

“They owe him an apology...They need to stop fact-checking opinion."

Counselor to the President Kellyanne Conway on Wednesday noted that the media outlets "fact-checking" the president now are the same ones who have gotten "nothing important" right over the last three years, "beginning with the very election where they were relying on their own data."