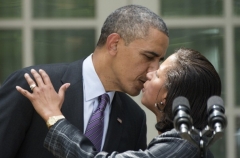 Former U.S. Ambassador to the U.N. Susan Rice embraces her boss President Barack Obama after he named her as his National Security Advisor in June 2013. (Photo by JIM WATSON/AFP via Getty Images)

Speaking to "The Situation Room" with Wolf Blitzer Tuesday evening, Rice accused President Trump and Attorney General William Barr of "undermining confidence" in mail-in balloting, which she described as "another form of voter suppression, nothing less."

Blitzer asked Rice if she is "concerned about the integrity" of the "mail-in voting process."

"I am not concerned about the integrity of mail-in voting and absentee balloting, which is essentially the same thing," Rice responded:

We have five states in this country that have had only mail-in balloting for many years with virtually no cases of fraud and high success.

What does worry me is that the president and the attorney general and others in the administration are undermining confidence, public confidence in mail-in voting for political reasons without any basis in fact. They go ahead and use mail-in ballots when it's convenient for them, but they don't want other people to do so because they have some notion, I believe misplaced, that it's to their political detriment.

What should be in everybody's interest is that every American who is eligible to vote has the ability to vote safely and securely. And I think mail-in balloting, absentee balloting has been demonstrated to be an effective approach, and one that guarantees a high degree of security.

And when you have the president and the attorney general actively sowing distrust in a means of voting, it's another form of voter suppression, nothing less.

Universal mail-in voting and absentee voting are not the same thing. Absentee voters must request that a ballot be sent to them. States with mail-in voting automatically send ballots to registered voters, without voters requesting them.

Both President Trump and Attorney General Barr have expressed support for absentee voting. But they have voiced concern about where the automatically mailed ballots end up, given the inaccuracy of voter registration rolls.

Absentee voting is "fine," Barr told CNN's "The Situation Room" last week. But universal mail-in ballots -- "this is playing with fire," he warned. Barr also raised the prospect of counterfeit ballots, "either by someone here or someone overseas."

In addition to the five states that already have universal mail-in voting, four more states and the District of Columbia have adopted it this year, citing the coronavirus pandemic as a reason.