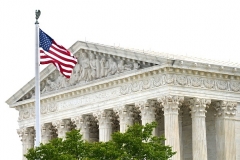 But on Wednesday, Whitehouse asked Barrett a number of questions, beginning with judicial ethics and whether Barrett is under investigation.

Here's how that exchange went:

Whitehouse: Judge Barrett on the 7th circuit you are subject to a code of ethics, are you not?

Whitehouse: "I presume you are okay with that?"

Whitehouse: "Indeed it is true of all the circuit courts that they are subject to pretty much the same code of ethics, correct?"

Whitehouse: "It gets different at the Supreme court. Supreme Court is not subject to a code of ethics, is it?"

"I'm not aware," said Barrett, clearly wondering where this was heading.

"I suspect you would be. We can put that behind us," Whitehouse said. "With respect to reporting of gifts, of travel, of hospitality and what the Constitution might call emoluments, all of the circuits have a pretty solid rule about reporting those, and you comply with that rule on the 7th circuit, do you not?

"I do. It might even be by statute that we have to do that, but I do," Barrett said.

The discrepancy here is with the Supreme Court, which has a much lower standard of transparency and disclosure about those very same things. So it's a bit of a mystery when I see the situation that when you go up to the court you will be not subject to the code of ethics that you are subject to now or any other, and you will have lower reporting requirements than you do now or that any of us do.

I flag that for you because I think it's anomalous the highest court should have the lowest standards and I don't know if you want to say something about that. At a minimum I hope you will keep an open mind about trying to fix that when you are on the court. If you have a defense of why the highest court should have a lower standard, have at it now.

"I didn't know," Barrett said. "I know that the justices file financial disclosure reports. I have never looked at one. I didn't know that they were different or that it was a lower standard from the ones the rest of us file."

"Take a look at that when you get up there," Whitehouse advised.