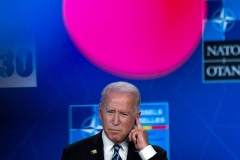 President Joe Biden gives a press conference after the NATO summit in Brussels on June 14, 2021. (Photo by FRANCISCO SECO/POOL/AFP via Getty Images)

(CNSNews.com) - Despite all the "big talk" before President Biden went overseas this week, "we didn't get much done," Sen. Tommy Tuberville (R-Ala.) told "Mornings With Maria" on Friday.

"No action," he said, pointing to "gaffes" made by Biden on the world stage.

"The problem we're having right now, this guy was elected president of the United States. And the problem with that is, he's got his handlers running this country. He can't do anything on his own. And people are losing confidence in him every day.

“You know, if he wants to go over there, fine. But we spent millions of dollars and we could have sent a pair of sunglasses and a sheet of paper over there by Amazon and saved a lot of money for the American people."

Host Maria Bartiromo noted that Tuberville is not alone in thinking that Biden is not running the country.

On Thursday, Rep. Ronny Jackson (R-Texas), the former White House physician, sent a letter to President Biden, Biden's physician, and Dr. Anthony Fauci, urging a cognitive test for Biden, the results to be shared with the American people. More than a dozen Republicans signed the letter.

Jackson said Biden's "clear decline" was evident in his "embarrassing performances on the world stage."

"When I was Physician to President Donald J. Trump, the liberal media relentlessly pushed a narrative that he needed a cognitive test and that it should be the standard for anyone serving as Commander-in-Chief and head of state. I administered the Montreal Cognitive Assessment (MOCA) test, and President Trump excelled. Given the precedent set and Biden’s clear mental impairment, I believe it is past time he undergo a cognitive test.”

"Well, I don't know whether we need to go that far," Tuberville told Bartiromo. "But he needs to step out and start doing some press conferences, let the American people know that he's representing all of us.

"And you can tell right now, everything's staged. Everything behind the scenes is already charted. There's nothing out there that -- you know, we can just -- you know, anybody can just ask a question, what are we doing here?

“And again, it's all about leadership. We don't have leadership right now. We're being led by people from behind the scenes, and the American people are going to lose confidence. We're just in the first five months of this presidency. It's going to get worse.”

Tuberville pointed to the out-of-control southwest border as well as Biden's defense budget request, which is only 1.6 percent more than the amount appropriated in Fiscal 2021. "We'll try to get by this year with this budget," Tuberville said, "but we can't keep cutting like this with China spending more, Russia spending more and we're going the other way. It makes no sense. It really doesn't."