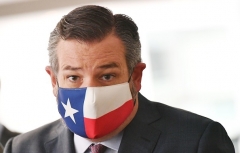 (CNSNews.com) - Sen. Ted Cruz (R-Texas) says he's worried about what may happen on November 3, as Democrats and partisan activists in the media find fault with everything Trump does or says while giving Biden easy questions and positive reviews.

Hannity noted it's especially difficult for a Republican to win the presidency, "because you start out without California, Oregon, Washington, New Jersey, New York, and Illinois. It's a lot of electoral votes.

“Then you gotta win Florida, Ohio, Georgia; you gotta win North Carolina, you’ve got to hold Iowa, Arizona; you gotta fight for Nevada, New Mexico. Then you've got to get Pennsylvania, Wisconsin, Michigan, Minnesota. You got to fight for Nebraska Congressional District 2, Maine too, and New Hampshire.

“It's always hard for a Republican to win, and I don't trust all these new laws that are going on the books seemingly every day and every state extending out how many days they'll count the vote,” Hannity said.

“The left is showing up. They're pissed off. They hate Trump. We've got to make sure everyone else shows up.”