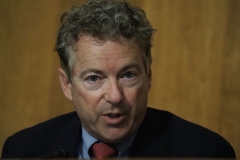 (CNSNews.com) - Sen. Rand Paul (R-Ky.), a staunch proponent of individual responsibility and freedom, says every American should assess the risks associated with the coronavirus pandemic and make the choices that suit them.

Paul, a physician, told Fox News's Neil Cavuto that both the economy and the schools should open and stay open:

The other interesting thing is, when you do contact -- contact tracing, in China, the Netherlands, Britain and in Iceland, what you find is, kids not only rarely get this, rarely die from it, but they rarely transmit it. They're just not good transmitters. And, in general, people who are asymptomatic are not good transmitters.

So, the daycares stayed open in New York throughout this for doctors' kids, nurses' kids, hospital janitors' kids, anybody that was associated -- firemen, police. The daycare stayed open. And guess what? Had very little coronavirus and very few staff members -- about one percent of staff members were infected. And most of these staff members, if they're in a reasonable age group, are at very, very low risk of succumbing to this disease.

Paul has tangled with the go-slow approach of Dr. Anthony Fauci at several committee hearings on Capitol Hill. "[I]f we're going to live in a free country, none of these people should get to make a decision for us, for us individually," he said. "Each individual should assess the risks and make their choices.

"And so it isn't one-size-fits-all. We can't say, oh, everybody needs to stay at home because someone at the nursing home might get sick. No, let's try to be careful and protect those in the nursing home, but let's open the economy, open the schools."

Paul also raised the "possibility" that the recent spike in COVID-19 cases in Sun Belt states "may well be enhancing immunity."

And it may well be that they reach what I think New York has already reached, a point at which the disease will begin to burn itself out.

Interestingly, no one's saying this, but it may not be herd immunity of 60 percent. It may be a break point for the disease that's much less than that. And there are mathematicians who look at this, and they say that the models of herd immunity are based on random behavior and random vaccination.

When you get herd immunity from the disease, it's not randomly distributed. And you have some who are very social and some who are less social. But the bottom line is, historically, diseases and viruses have burnout at 25 percent immunity, when you look back at our past.

No one knows what the future holds, but I tend to be optimistic that we might get to 20, 25 percent immunity, and the disease may be -- we may be well over -- may be able to overcome the disease at that point.