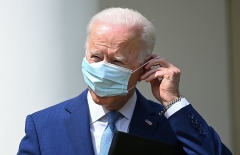 (CNSNews.com) - "If you want more people to get vaccinated, Joe Biden should go on national TV, take his mask off and burn it," Sen. Rand Paul (R-Ky.) said on Wednesday.

"Light a torch to it and burn his mask and say, I've had the vaccine; I am now safe from this plague. If you'll get the vaccine, you can be safe too.

"The burden of proof should be on the government to prove that we are spreading it, and then we'll listen to them," Paul said.

The senator was reacting to Dr. Anthony Fauci, who insists that Americans should still wear masks, whether they're vaccinated or not:

"What happens is that, you might get infected and get absolutely no symptoms not know you're infected, and then inadvertently go into a situation with vulnerable people. And if you don't have a mask, you might inadvertently infect them. Now, there's a small risk of that, but it's there," Fauci said.

"The vaccine is an amazing thing," Paul said:

So is natural infection, if you get it the hard way -- you don't want to wish that on people, but people have survived it. We shouldn't discount it.

But the vaccination is virtually zero hospitalizations and virtually zero deaths. In fact, I'm not aware of any. Re-infection from people have had it is very low number. Most people get a mild course of it, and there's a rare, rare if ever re-infection that caused a fatality.

So really, we should appreciate immunity, both naturally acquired and by vaccine. But you know why people don't trust the government, because the government saying oh, no, everyone's the same, whether you've had the disease or not, you have to be vaccinated. If you're 10 years old, you need -- it's just one-size-fits-all that people know that this isn't as dangerous for young people, but it's very dangerous after a certain age and for overweight people.

Paul noted that disease antibodies tend to diminish over time. “But immunity, long-lived immunity, also comes from T cells and memory cells. So there are other lab tests that you can do to test whether people still have immunity.”

Biden: Keep your masks on

President Biden on Wednesday announced that he will reach his goal of 200 million shots on Thursday, his 92nd day in office.

"Now to be clear, we still have some work to do with our target groups," Biden said.

"We have made remarkable progress, and as we continue, as I said, the time is now to open up a new phase of this historic vaccination effort. To put it simply, if you were waiting for your turn, wait no longer. Now is the time for everyone over 16 years of age to get vaccinated."

Biden urged employers to give workers paid time off to get vaccinated.

"To celebrate our independence from this virus on July 4 with family and friends in small groups, we still have more to do in the months of May and June," the president said.

"We all need to mask up until the number of cases goes down, until everyone has a chance to get their shot. To Americans 16 years and older, it's your turn now, now. So go get your vaccine before the end of May. We can do this, and we'll do this as long as we don't let up."