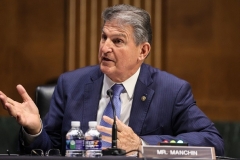 Sen. Joe Manchin (D-W.Va) is the pivotal vote on the Democrats' massive "human" infrastructure (entitlement) bill. He said he's in no rush to pass it. (Photo by OLIVER CONTRERAS/POOL/AFP via Getty Images)

(CNSNews.com) - What's the big rush? Sen. Joe Manchin (D-W.Va.) wondered on Sunday, as he was pressed to explain his stated opposition to the $3.5 trillion cost of the Democrats' "human" infrastructure bill.

We have the unknown, and the unknown is everything you have been talking about, COVID, what's going to happen with COVID, what it will do to the economy.

No one is talking about inflation or debt, and we should have that as part of the discussion, and then the geopolitical, what's going on around the world and what type of challenges we may face.

So the unknown is there, and we don't know what that's going to -- going to partake. What we do know is that, basically, the need for this, the emergency to do something in the next week is not there.

We've done $5.4 trillion, George, over the last year and about a year and a half -- $5.4 trillion, and a lot of that money is still going out the door. There's no one going to be left behind for the rest of this year and most of next year.

So the urgency, I can't understand why we can't take time, deliberate on this, and work.

But Manchin on Sunday noted that the two bills are "two completely different categories."

"The one we have in front of us right now that's already passed in a bipartisan way with 19 Republicans, George, is the hardcore infrastructure, the roads, the bridges, Internet, water, sewer, all the things that have been neglected for the last 30 years.

"The president went out and campaigned on this. He went out and sold this thing. We all got behind him. We had a bipartisan deal. And I think it's the greatest thing that we could do. That's the one that has the urgent -- and emergency that we have. Let's get that one done. It's sitting over in the House right now."

Manchin, and many others, say the reconciliation bill is not fully paid for, despite Democrat leaders insisting it is. He pointed to the mounting debt, which now stands at roughly $28.75 trillion, as well as inflation:

"Inflation -- people are talking to me in West Virginia about the price of gas, the price of everything they buy, including their groceries, how it's affecting them.

"So I think we need to see what we're doing right now and the effects we're having. No one is saying they're losing their benefits, because they're going to extend up through next year. Why are we rushing for this one week? Why do we have to have everything done in one week?"

Manchin said he opposes the idea of holding one bill hostage to another.

He said the bipartisan infrastructure bill could be passed now -- "and we can still go on to reconciliation. We can debate it. We can discuss it. We can have hearings on it, make sure, whatever we do, we do it and do it right and don't put more out there that's not needed, or basically put ourselves further in debt. We can have those discussions.

"But why would you hold something that's as needed as this, as far as the hard infrastructure, that's been basically neglected for 30 years, and just sit back and say, well, we can't do that?

"If you don't need bridges fixed or roads fixed in your state, I do in West Virginia. I need Internet in West Virginia. I got water and sewage problems. I have got all the problems that we have addressed in the bipartisan infrastructure bill. And that's the one that has the emergency."

In a similar vein, Sen. Manchin told CNN's "State of the Union" that Congress has already "done an awful lot" to support Americans hit by the COVID pandemic, sending $5.4 trillion out the door with various CARES and rescue packages.

"And we have tried to help Americans in every way we possibly can. And a lot of the help that we put out there is still there, and it's going to run clear until next year, 2022."

Manchin noted that "there's still an awful lot of people that need help."

But you have 11 million jobs that aren't filled right now. Eight million people are still unemployed. Something's not matching up.

Don't you think we ought to hit the pause and find out? The vulnerability that we have, Dana, right now, we don't know what is happening with this COVID. It's awful, coming back the way it is with a vengeance. And we don't know about inflation. We know it's running rampant right now.

I can tell you, in West Virginia, inflation's running rampant, and, on top of that, the challenges we're going to have, geopolitical challenges. Shouldn't we be prepared?

Manchin, speaking to CNN, refused to say how big he thinks the human infrastructure bill should be: "You know, I think that you're going to have to look at it and find out what you're able to do through a reasonable, responsible way."

Manchin said he supports raising the corporate tax rate to 25 percent, but he also said he wants to make sure the United States remains "globally competitive."

He said he does not believe Congress can pass the reconciliation bill by the end of the month: "There's no way we can get this done by the 27th, if we do our job." He pointed to major differences of opinion. "I have been talking. I'm working with people. I'm willing to talk to people," he said.