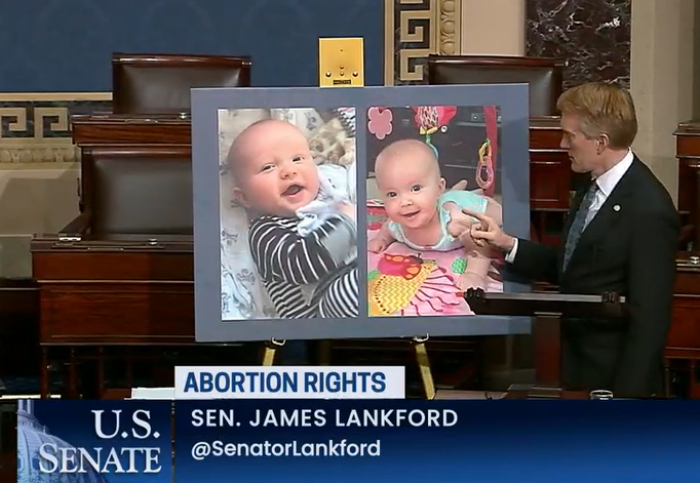 Sen. James Lankford (R-Okla.) gives an impassioned speech defending the right to life on May 11, 2022, ahead of a Senate move to life all restrictions on abortion. (Photo: Screen capture)

(CNSNews.com) - Sen. James Lankford (R-Okla.), standing next to enlarged photographs of smiling babies, asked a pivotal question on Wednesday as the Senate prepared to vote on a Democrat bill that would lift all abortion restrictions, including some that are allowed under Roe v. Wade.

Far from returning abortion issues to the states, as the leaked Supreme Court opinion suggests the justices may do, the Senate bill would remove all state restrictions on abortion, including parental consent, religious exemptions, waiting periods and other state laws.

Lankford said the "simple decision" before the Senate is "when does life begin?"

"The real question that comes up is: when is that child a child? Because in the most simple of questions, for those two little ones, which I know, only a short time before would have been in the womb.

“So the simple question that this body is dealing with today is pretty straightforward: who gets to decide whether she lives or dies? Who gets to pick that? I think she should live.

"And for that simple statement -- that I believe she should have a chance at life -- I have been called a totalitarian radical extremist because I believe her life is valuable. What kind of upside down world do we live in when people who believe children are valuable are the extremists? Are the radicals? Are the totalitarians?"

Lankford said he's heard all the pushback from the leftist activists and journalists who use words such as "equity, privacy rights, bodily autonomy, health care decisions, freedom to choose, reproductive rights, basic civil rights. "All those are euphemisms for 'she dies,' the senator said.

Lankford described a conversation he had last weekend with someone who was "very passionate" about abortion, including up to the moment of birth"

"And to my shock they responded, well, turtles and eagles are endangered, so they should be protected. And I’m called the extremist because I happen to believe she's precious, and just because there are billions of other humans around, I don't think she's disposable."

‘The only difference -- just time’

Lankford displayed more enlarged photos, one of a newborn baby and one of a baby about to be born: 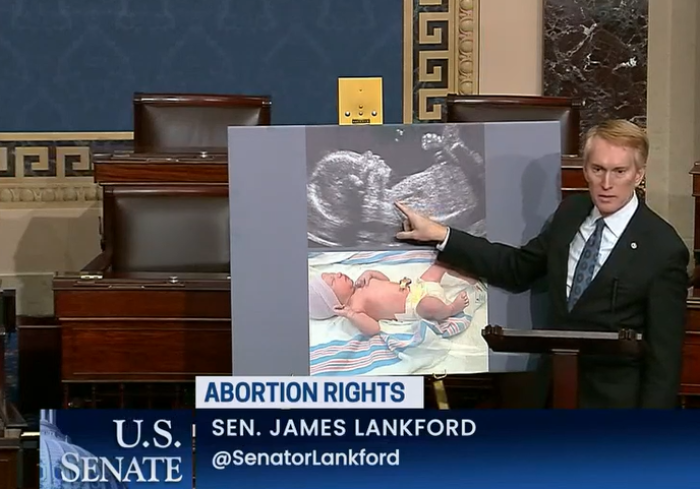 "In fact, as funny as it is, they're both in the same position, which by the way, for my wife and I, we call this the touchdown position, how babies sleep with their hands up over their heads -- and lots of babies do that, including mine did. This baby is in the touchdown position and sleeping. Look, this one is, too. What's the difference between these two?

"I don't see this as alive and tissue. That looks a lot like a baby to me. And for that I’m called the extremist and the radical. This baby sucks their thumb in the womb, responds to their mom's voice, feels pain, has unique fingerprints, has unique DNA, kicks around like crazy. What's the difference between those two? Time. That's it. That's the only difference -- just time."

‘Every child is valuable’

Lankford said the Women's Health Protection Act of 2022 "gives a statutory right to abortion, even though 71 percent of Americans believe there should be some limits to abortion, this bill says, no, there can't be."

"This is not some simple codifying Roe bill. This is telling the nation, I’m sorry, you may think that little girl is a little girl and is valuable. We think she's disposable."

Lankford noted that he and other pro-life members "have fought to make adoption more affordable, expand the child tax credit for the unborn, continue to provide assistance, food, health care to needy families, maternal health. We should all be working to support women in very difficult days -- but she (the baby) matters in this conversation. We can't lose track of that,” he said.

"Mother Teresa once made the comment ‘if we accept that a mother can kill even her own child, how can we tell other people not to kill one another?’ You may say well that's Mother Teresa's opinion that that child is a child. I would also tell you it’s Joe Biden’s as well.

“Joe Biden also made the statement just last week, ‘The Dobbs decision is about the ability to abort a child.’ To abort a child was President Biden’s statement. I agree. The conversation right now on the floor is, what's her future. What happens next? It will decide a lot.

"I can assure you I’m going to speak out the rights for every single child, and we'll declare again, every child is valuable. If people call me a radical for believing children are valuable, so be it. But I think it tells us a lot about our culture that I’m the radical one because I believe she has a hope and a future."

Later on Wednesday, in a 49-51 vote, the Senate rejected an attempt to proceed to a vote on the Democratic legislation, with Sen. Joe Manchin (D-W.Va.) joining all Republicans in blocking the bill.