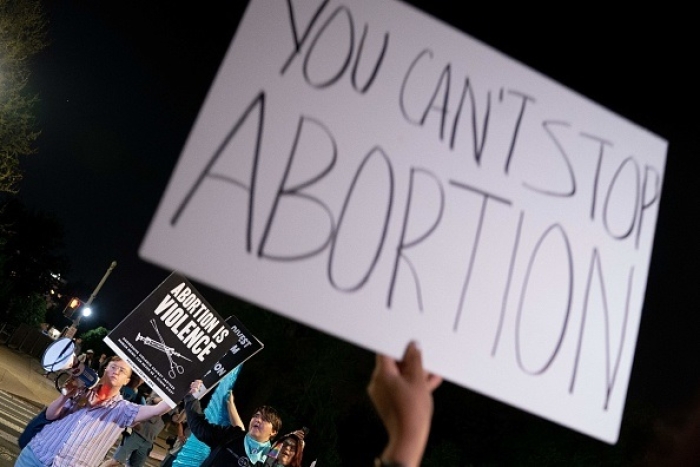 Pro-life and abortion activists clash at the US Supreme Court on May 2, 2022. (Photo by STEFANI REYNOLDS/AFP via Getty Images)

(CNSNews.com) - Democrats have found their election issue, thanks to a leak from inside the U.S. Supreme Court.

Sen. Amy Klobuchar (D-Minn.) joined MSNBC's Rachel Maddow Monday night to lament the reporting by Politico that the Supreme Court may be about to overturn Roe v. Wade.

Someone leaked a draft majority opinion, written by Justice Samuel Alito in February, that says: "We hold that Roe and Casey must be overruled...It is time to heed the Constitution and return the issue of abortion to the people’s elected representatives.”

Klobuchar said she believes "the American people are with us" on abortion rights.

"So I'd like to focus a bit here on what's going to happen if they do issue this opinion when all signs point to that they will. Not just this leak, which is unfortunate, but also, what they have said in the past,” Klobuchar said:

"If this is issued, over 20 states, there's a trigger where abortion will automatically be banned. So, it's no longer going to be a decision between a woman and her doctor. Basically, I guess, Ted Cruz has made this decision for people.

"The second thing that we're going to see happen is that you're going to have individual states considering laws banning it, and meanwhile, in Washington, it's on us now to try to codify Roe v. Wade into law. And as you, know we have two Republican senators who are with us when it comes to choice.

“But the question is, with the filibuster in place, which I firmly believe we should reverse, could we ever get to 60 (votes)? So, this is what we're dealing with right now.

"And I cannot overemphasize how, what a change this is, what a disregard to precedent, if this is true."

Maddow said a woman's "economic freedom and self-determination" stem from her ability to make decisions about when and whether to have children. "If that becomes the government's decision, if that is no longer a decision that women are allowed to make for themselves, that fundamentally changes the economic and life and cultural prospects for every woman in the country," Maddow said.

"I wonder if that stark truth about what this does to the future of American womanhood and the future of the American family, the future of who we are as a culture, might be enough to scare Republicans and Washington off an effort to do a nationwide ban.

“I mean, as you said, those trigger laws don't require any action. They'll just go into effect in more than 20 states. But we have reporting in The Washington Post today that they want a nationwide, six-week, flat ban," Maddow said, asking Klobuchar if she thinks Republicans might be "too scared to actually do something that radical?"

Klobuchar responded that with the Senate divided 50-50, an abortion ban could not pass:

"But I think what you're going to see is a discussion of this in real terms, like we've never seen before. Back alley abortions, people having to take buses to other states. People not being able, as you said, to make their own economic decisions right as we're coming out of this pandemic where there's so much uncertainty right now, and people are just trying to get their grounding. And then we're literally stripping the women of this country of their rights.

"If that happens, I think you're going to see repercussions like never before. They have basically stacked the court with these judges through various procedural games that they played in the Senate. And now is the moment. And the only way this gets decided, if this opinion gets issued as is, it's going to be state-by-state fights about this, with the automatic triggers going in place in many. And then it's going to be a decision for Congress.

"And it makes the election for the House and the Senate more important than any we've seen in our lifetime when it comes to the protection of women's rights."

At the end of her show, Maddow said the leaked draft majority report, if that does turn out to be the final ruling, would clear the way for Republicans to "completely ban abortion in this country."