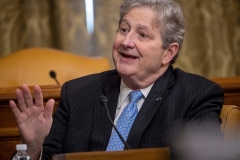 (CNSNews.com) - The ever-quick-with-a-quip senator from Louisiana says the only way to improve the Democrats' Build Back Better Act is "with a shredder."

When I first heard about the Build Back Better bill, I thought to myself, this is satire, right? And then I took a look at it, and I was amazed beyond imagination. I mean, it's breathtaking, trillions of dollars of new spending, new taxes, new debt, new welfare programs.

The only way I know how to improve that is with a shredder. It's going to fuel inflation. When a Hot Pocket costs you $10, remember, we're building back better.

At least in the short term, a dramatic rise in the cost of child care. For example, in 2022, if the bill passes, if a couple are making together $70,000 a year, you know what the cost for child care is going to be for them? $29,000. That's out of pocket. And that's for one child. If you have two, who can afford that?

The House has already passed the bill, and Senate Majority Leader Chuck Schumer (D-N.Y.) has said he wants to bring it up for a vote before Christmas. Democrat Sens. Joe Manchin and Kyrsten Sinema are still thought to be holdouts, and without their votes, the bill will not pass.

Kennedy warned that the bill would add "billions of dollars in new debt," despite denials from Treasury Secretary Janet Yellen and President Joe Biden, who insist it is "fully paid for."

"We haven't talked much about the new taxes," Kennedy said. "President Biden, he whispers to the American people, 'pay your fair share.' But he never bothers to answer the question...of, what is your fair share of what somebody else has worked for? We have never had that discussion.

"The Build Back Better bill just takes Marxist class analysis and uses it to redistribute wealth in a way that I think is going to irreparably damage the American people."

Kennedy said he did not vote for the bipartisan infrastructure bill, or part one of the Democrats' agenda. Part 2 is Build Back Better.

I didn't vote for the infrastructure bill, because only 23 percent of it went to went to infrastructure. And I wasn't going to spend taxpayer money to buy a car to get the cupholders.

And whether it passes, I think, is going to be determined by Senator Manchin and, to some extent, Senator Sinema. Some of my colleagues think the other -- my other Democratic friends in the Senate are going to object, but I don't -- I don't think so. I think they have been -- they have been hit with everything but a chair, and they have -- they have given in.