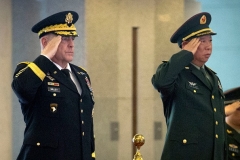 "And I think the general (Joint Chiefs Chairman Gen. Mark Milley) has conceded that he did have communications with the Chinese Communist Party and its military wing. We need to see a transcript," Kennedy said:

This is serious. This is more of a just insubordination. As a people, we've decided that we want to maintain a wall between our commander-in-chief who must be a civilian -- it's the President of the United States who was duly elected. A wall between the President and the military. And there's a reason for that. Go look at Myanmar, go look at Guinea right now, go look at the other military coups throughout the world...

Milley is under fire from some Republicans following revelations in a new book that he called his Chinese counterparts in the waning days of the Trump presidency to reassure them that the U.S. did not intend to attack China, as some Chinese officials apparently feared. Milley reportedly was motivated by concerns about Trump's state of mind.

Milley allegedly told his Chinese counterpart: "General Li, you and I have known each other now for five years. If we're going to attack, I'm going to call you ahead of time. It's not going to be a surprise."

A statement released by Milley's office on Wednesday said:

The Chairman of the Joint Chiefs regularly communicates with Chiefs of Defense across the world, including with China and Russia.  These conversations remain vital to improving mutual understanding of U.S. national security interests, reducing tensions, providing clarity and avoiding unintended consequences or conflict.

His calls with the Chinese and others in October and January were in keeping with these duties and responsibilities conveying reassurance in order to maintain strategic stability. All calls from the Chairman to his counterparts, including those reported, are staffed, coordinated and communicated with the Department of Defense and the interagency.

But were Milley's calls to China properly communicated?

Ingraham noted that former Secretary of State Mike Pompeo and former Director of National Intelligence John Ratcliffe both indicated that they weren't aware of Milley's calls to China. And President Trump on Wednesday issued a statement, saying:

Milley never told me about calls being made to China. From what I understand, he didn’t tell too many other people either. He put our Country in a very dangerous position but President Xi knows better, and would’ve called me. The way Milley and the Biden Administration handled the Afghanistan withdrawal, perhaps the most embarrassing moment in our Country’s history, would not exactly instill fear in China. Milley is a complete nutjob! The only reason Biden will not fire or court-martial Milley is because he doesn’t want him spilling the dirty secrets on Biden’s deadly disaster in Afghanistan.

Biden on Wednesday expressed co"great confidence" in Milley, but don't bet on it, Kennedy said:

"And maybe that's true for the short term. But I'm going to give you even odds that eventually the White House throws him under the bus. Because the White House desperately needs someone besides President Biden on which to blame the stunning incompetence in Afghanistan."