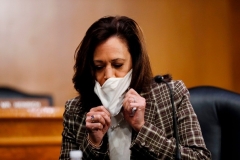 (CNSNews.com) - Sen. Kamala Harris (D-Calif.) on Thursday expressed concern for career officials at the Justice Department, now serving under Attorney General Bill Barr, who, she said, "really has done the work of disrupting justice in American."

"The DOJ has lost its way," Comey tweeted. "But career people, please stay because America needs you. The country is hungry for honest, competent leadership."

Harris told MSNBC's Nicolle Wallace on Thursday, "It's not surprising" that Barr wants to dismiss the case against Flynn, who pleaded guilty to making false statements to the FBI:

“He (Barr) clearly has never followed the role, the responsibility and the mission of the attorney general, which is to be the people's lawyer,” Harris said:

He has instead consistently done Donald Trump's bidding, and this is yet another example. And you know, here's the thing. Remember Elliott Richardson, Nixon's attorney general, under a Republican, nominated by a Republican president who refused to do the investigation of Archibald Cox and said I'm resigning, right?

The role and responsibility of the United States Department of Justice is to do justice, unimpeded, uninterfered (with) by favor or fear, and also to do the work that is about doing justice and not being interfered with by a political agenda, which is clearly Donald Trump's agenda.

It's outrageous, and I couldn't agree more, I absolutely agree we have to make sure that the career professionals in that department stay there and hold down the fort in spite of the fact that there's an attorney general of the United States who is -- who has really done the work of disrupting justice in America.

Harris is calling for Senate oversight. She wants Attorney General Barr to appear again before the Senate Judiciary Committee, which is chaired by Trump ally Lindsey Graham.

Harris also managed to link Barr's motion to dismiss the case against Flynn with the ongoing coronavirus pandemic:

"We need to find out what is going on," Harris told Wallace:

We need to oversee what is happening in that agency in terms of what conversations Bill Barr is having with the president, what kind of conversations they are having that are about interfering with the justice that is being done by the career folks there.

In the midst of a crisis because this president will not use the Defense Production Act to get the number of tests out to America that we need to actually have some control over this pandemic, in the midst of all of that -- the president has his attorney general, the hand of the president, doing his political work, his personal bidding, in the face of what should be a Justice Department doing the work of preserving justice and fighting for justice in America.

But that's not what we're going to get in Bill Barr. And frankly, again, I will say, he should resign.

Harris is believed to be among the women being vetted as a possible running mate for Joe Biden. She told Wallace she'd "be honored" to serve, if asked.

Flynn's defenders say the FBI "entrapped" Flynn by interviewing him but not telling him he was under investigation. This happened four days after Trump's inauguration -- and after the FBI had planned to close its counterintelligence case against Flynn because it had found no wrongdoing.

The Justice Department's motion to dismiss says the Jan. 24th FBI interview of Flynn "was untethered to, and unjustified by, the FBI’s counterintelligence investigation. The investigation was "no longer justifiably predicated" because the FBI had, "in Bureau’s own words, prepared to close because it had yielded an "absence of any derogatory information."

Moreover, "The Government is not persuaded that the January 24, 2017 interview was conducted with a legitimate investigative basis and therefore does not believe Mr. Flynn’s statements were material even if untrue.  Moreover, we not believe that the Government can prove either the relevant false statements or their materiality beyond a reasonable doubt."

Meanwhile, Attorney General Barr is getting high marks from Republicans who for years now have anxiously pursued truth and transparency about the FBI’s activities regarding all things Trump.