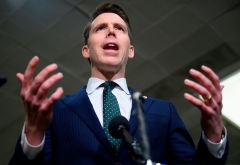 Dorsey, in several tweets Wednesday night, said Trump's comments about mail-in ballots being rife with fraud [see below] "may mislead people into thinking they don’t need to register to get a ballot (only registered voters receive ballots)," Dorsey wrote. "We’re updating the link on @realDonaldTrump’s tweet to make this more clear," Dorsey added.

Sen. Hawley noted that on Tuesday, "for the first time ever, Twitter branded the President’s tweets with a 'fact check' designed to encourage readers to believe that the President’s political speech was inaccurate.

Hawley said, "Twitter’s decision to editorialize regarding the content of political speech raises questions about why Twitter should continue receiving special status and special immunity from publisher liability under Section 230 of the Communications Decency Act."

Meanwhile, Hawley noted that Twitter has failed to respond to the "outright lies and propaganda by the Chinese Communist Party," which, for example, used social media to blame American soldiers for starting the coronavirus pandemic.

Hawley wants Twitter to explain why companies that act like publishers -- by editorializing on President Trump’s tweets, in this case -- should not be treated like publishers.

Hawley told Fox News's Laura Ingraham Wednesday night that the "special deal" the government has given to Twitter, Facebook and Google has allowed them to become as big and powerful as they are:

They are free from liability, free from suit. They’ve got a special immunity. And here’s the thing. If they are going to act like regular publishers, and Twitter’s going to editorialize about the president of the United States, then they ought to be treated like a regular publisher, and that's what my bill would do.

Hawley said social media platforms have been politicized for some time, censoring conservative views, in some cases. But by deciding to "fact-check" the president -- "that’s really elevated what they’re doing.

“They are editorializing, they are censoring, they are making political judgments. And yet they’re claiming that, oh, no, no, no, we’re not like traditional media. We should be treated differently. We're neutral. We don't have any opinions, we just post other people’s opinions. It just isn't true, Laura. And it's time to start calling them out on it."

Hawley said if social media companies want to editorialize like other media outlets do, "go right on ahead – you can do that, it's a free country, they’re a free company, but they shouldn't get a special deal from government because of it."

Late Wednesday night, Twitter CEO Dorsey tweeted, "We’ll continue to point out incorrect or disputed information about elections globally...This does not make us an 'arbiter of truth.' Our intention is to connect the dots of conflicting statements and show the information in dispute so people can judge for themselves. More transparency from us is critical so folks can clearly see the why behind our actions."

Dorsey said Trump's tweets about mail-in ballots being rife with fraud "may mislead people into thinking they don’t need to register to get a ballot (only registered voters receive ballots)."

"We’re updating the link on @realDonaldTrump’s tweet to make this more clear."

Facebook CEO Mark Zuckerberg, meanwhile, told Fox News on Wednesday that privately-owned digital platforms such as Facebook and Twitter "shouldn't be the arbiter of truth of everything that people say online."

In a series of tweets on Wednesday, President Trump promised "big action" against Twitter:

"Twitter has now shown that everything we have been saying about them (and their other compatriots) is correct. Big action to follow!"

"Republicans feel that Social Media Platforms totally silence conservatives voices. We will strongly regulate, or close them down, before we can ever allow this to happen. We saw what they attempted to do, and failed, in 2016. We can’t let a more sophisticated version of that...happen again. Just like we can’t let large scale Mail-In Ballots take root in our Country. It would be a free for all on cheating, forgery and the theft of Ballots. Whoever cheated the most would win. Likewise, Social Media. Clean up your act, NOW!!!!"