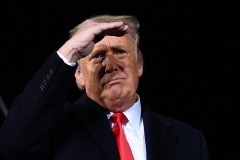 (CNSNews.com) - On January 6, Sen. Josh Hawley (R-Mo.) will be among the congressional Republicans objecting to certification of the Electoral College vote that will formally make Democrat Joe Biden the next president of the United States.

Hawley told Fox News on Monday he will vote against certification on behalf of his concerned constituents: "It is vital that we be heard on this issue and we have a chance to debate it," he said.

Hawley said his Missouri constituents have "major, major concerns about the integrity, the fairness of this election."

And they expect me to stand up and to raise those concerns. And this is the only forum I have to do it. This is the forum that the Constitution and the statutes provide.

And they also want action. They want an investigation into these irregularities. They want new election laws to make sure that our elections are secure going forward.

This is my chance to stand up and speak for them. And somebody has got to take their concerns seriously and speak up. And that's what I'm going to do.

Hawley and his fellow objectors -- dozens of them in the House and Senate, now including Sen. Kelly Loeffler of Georgia -- are not expected to change the election outcome, but their vote against certification will allow them to air their concerns about what happened in Pennsylvania, for example.

Hosts Bret Baier and Martha MacCallum tried to pin down Hawley on whether he expects to change the election outcome with his objections:

He noted that the 12th Amendment directs Congress to count the state-certified electoral votes, and there's also a law that governs what Congress does on January 6th:

"And my point is, this is my only opportunity during this process to raise an objection and to be heard, I don't have standing to file lawsuits. I'm not a prosecutor anymore. I used to be, but I'm not anymore. I can't investigate claims of voter fraud on my own.

Hawley said it's all about election "integrity."

"And this is about taking a stand where you can take a stand. I mean, you can -- I suppose you can just say, well, listen, nothing I do will matter, it won't matter if I object or not, so I will just sit by and do nothing. I mean, that's one approach.

Hawley did not comment on his presumed, eventual presidential ambitions. He said his current job as the senator from Missouri is to "speak up for the concerns of Missourians."

"And that's exactly what I'm going to do on January 6, and that is all the reason that I'm doing what I'm doing. Missourians expect me to say, hold on a second. We have got concerns. And this is my opportunity to do that. If I didn't do it, I wouldn't be doing my job."

But at a rally in Georgia Monday night, President Trump said there's no way he lost the presidency. "The Democrats are trying to steal the White House. You cannot let them," Trump said.

"Over the last few weeks, we've demonstrated that we won the election in a landslide," Trump said, citing examples of Republican voting strength across the country.

Trump's long-shot hopes for victory on January 6 depend on having the Democrat-led House sustain Republican-raised objections to the Electoral certification process. In other words, there's little chance of the election being overturned.