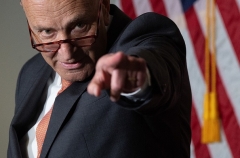 Senate Majority Leader Chuck Schumer (D-N.Y) is leading the Democrats' push to change or abolish the filibuster so Democrats can pass their partisan federal takeover of state-run elections. (Photo by SAUL LOEB/AFP via Getty Images)

(CNSNews.com) - Democrats -- hellbent on allowing the federal government to make voting so easy that it's easier to cheat* -- are willing to change longstanding Senate rules to pass their voting "rights" legislation with only 51 votes.

All 50 Senate Republicans oppose the federal takeover of state-run elections, and they have vowed to filibuster it. Under the current filibuster rule, 60 votes are needed to move the legislation to a vote.

But because of the way the House sent the legislation to the Senate -- as a "message" -- Democrats are able to start the debate on voting rights despite Republican objections. And for this partisan voting legislation only, Democrats will try to change the filibuster, rather than work with Republicans to find common ground on election reform.

The proposal as I understand it -- and of course there's always room for tweaks and last-minute adjustments. But we would return to the talking filibuster. And we would use the talking filibuster only for voting rights. So this is saying that this is such a foundational issue for our country -- free, fair, impartially administered elections, that it is important that if a group of senators decide to block even a debate on the issue and then a final vote on the issue, they need to come to the Senate floor, and they need to explain why.

And historically, the Senate rules say that every senator has a right to speak twice. But that When the speaking stops, you can call the question, and then you have a straightforward majority vote.

Now there are details and permutations between the beginning of a debate and when the speaking stops. But that's what this proposal is intended to do. It is intended to say, if you are going to block a vote on critical legislation that affects the foundation of our democracy, the access to the ballot and the impartial administration of the election process, then you need to come to the floor of the United States Senate and explain yourself.

And that's really what we're trying to do here is have the kind of debate that the filibuster was supposed to encourage but over the course of the last several decades, has had the exact opposite effect.

Hassan acknowledged that Democrats "found a procedural way to start debate without (Republican) support. That's what we are doing right now. We will continue to make the case for these bills."

Hassan said nothing less than "our democracy" is at stake. Hassan said she is "particularly concerned" about state-level attempts to "subvert our elections, to interfere with the fair count and certification."

She was referring to a provision in Georgia law that allows the State Election Board to remove and replace local election officials for performance failures. Another provision removes the elected Secretary of State as chairman of the State Elections Board. The Georgia Legislature would instead appoint a "nonpartisan" chair of the election board.

Democrats are not expected to succeed in their move to change the filibuster because two of their own -- Democrats Joe Manchin and Kyrsten Sinema -- oppose the attempt.

Democrats have used voting "rights" to demonize Republicans as racist. One of their two voting bills, the "Freedom to Vote Act," runs 534 pages and imposes all kinds of new federal regulations, rules and burdens on the states, which currently run their own elections.

A quick look at the bill's lengthy table of contents explains why Democrats see the bill as critical to their hold on power, hence their furious push to pass the legislation.

Part I of the bill mandates automatic voter registration, by electronically transferring the necessary information from a government agency to state election officials -- unless the individual affirmatively declines to be registered.

Part V, among other items, requires states to accept voter registration applications from individuals under 18 years of age (but they're not supposed to vote until they reach 18); and it requires states to establish and operate voter privacy programs.

Part VI establishes protections for in-person voting for individuals with disabilities and older individuals; and it establishes rules for mandatory early voting, vote by mail, and drop boxes.

The bill restores voting rights for felons who have served their prison sentences, putting the burden on states to notify ex-cons in writing that they have the right to vote in federal elections.

Particularly troubling is the section that would weaken voter I.D. laws in many states.

“(A) shall treat any applicable identifying document as meeting such voter identification requirement.

People without an acceptable "identifying document" may present a "sworn written statement" attesting to their identity; and they must be allowed to cast provisional ballots.

“(i) A driver’s license or an identification card issued by a State, the Federal Government, or a State or federally recognized Tribal government.

“(I) any branch, department, agency, or entity of the United States Government or of any State,

“(II) any State or federally recognized Tribal government, or

“(III) any county, municipality, board, authority, or other political subdivision of a State.

“(vi) A military identification card issued by the United States.

“(xi) A hunting or fishing license issued by a State.

“(xii) A identification card issued to the individual by the Supplemental Nutrition Assistance (SNAP) program.

“(xiii) A identification card issued to the individual by the Temporary Assistance for Needy Families (TANF) program.

“(xiv) A identification card issued to the individual by Medicaid.

“(xvi) A utility bill issued within six months of the date of the election.

“(xvii) A lease or mortgage document issued within six months of the date of the election.

“(xviii) A bank statement issued within six months of the date of the election.

“(xix) A health insurance card issued to the voter.

“(xx) Any other document containing the individual’s name issued by—

“(I) any branch, department, agency, or entity of the United States Government or of any State;

“(II) any State or federally recognized tribal government; or

“(III) any county, municipality, board, authority, or other political subdivision of a State.

“(i) any copy of a document described in subparagraph (A) or (B); and

“(ii) any document described in subparagraph (A) or (B) which is presented in electronic format.”

The Democrat legislation makes it harder to update voter registration lists. ("A State may not remove the name of any registrant from the official list of voters eligible to vote in elections for Federal office...unless the State verifies, on the basis of objective and reliable evidence, that the registrant is ineligible to vote in such elections," meaning the voter has either died or moved out of state.)

The list of must-dos, must-not-dos, rules, regulations, new requirements goes on and on.

You can and should skim the text here.

The second bill, The John Lewis Voting Rights Advancement Act, would restore a "preclearance" provision of the 1965 Voting Rights Act, which required the Justice Department to approve any voting changes made by states with a history of racial discrimination.

The Supreme Court decided in 2013 that preclearance is no longer necessary. In fact, last year, Georgia voters sent Raphael Warnock, a black pastor, to the U.S. Senate. He is up for re-election later this year.

McConnell: Democrats Are 'Lying,' Engaging in 'Fake Hysterics' Over 'Common-Sense' Voting Laws
McConnell: Voting Bill Aims to 'Federalize All Elections' to Benefit 'Democrats at the Expense of the Republicans'