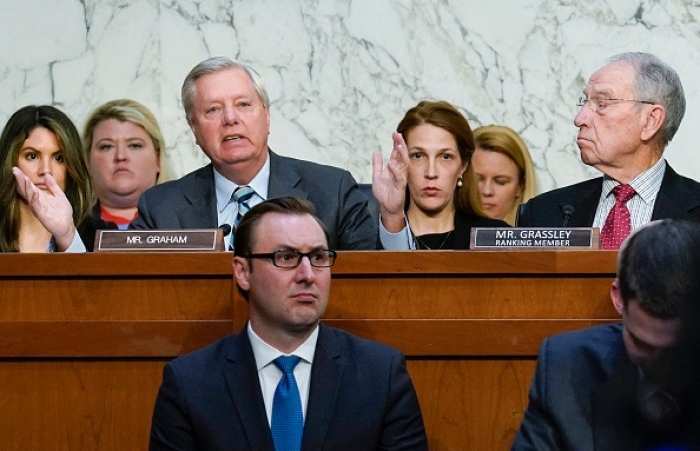 But he expressed dismay at the "most liberal people" and the "dark money" that may have influenced Biden's choice.

"Now, President Biden had a choice here, and he has every right to make it," Graham told the confirmation hearing. "Elections have consequences. He had many qualified African-American women to choose from. He chose you.

"Michelle Childs, a district court judge from South Carolina, supported by Jim Clyburn, that was in the mix," he noted.

"Senator Whitehouse, you talk about dark money -- you may be on to something," Graham continued:

“This Arabella group is funded by Soros and some other liberal billionaire. They've got so many groups within their group I can't name them all now.

"But they basically said if you -- if you pick Childs, you may have a primary opponent. The AFL-CIO said Justice -- Judge Childs was a union buster. The attacks from the left against Judge Childs was really pretty vicious, to be honest with you.

"So, you say, Judge Jackson, you don't have any judicial philosophy per se. Well, somebody on the left believes you do -- or they wouldn't have spent the money they spent to have you in this chair. So, we're going to find out how that statement holds up over time.”

Graham said Jackson's past legal representation of Guantanamo Bay detainees is not a problem for him, because "Everybody deserves a lawyer."

But, he added, "I think it does matter that the groups that came to your aid at the expense of Judge Childs, how -- how did that happen and why were they doing what they were doing?

"What is it about your nomination that the most liberal people under the -- the umbrella of Arabella threw in their money, their time, their support, and threatened Joe Biden if he picked Judge Childs?

"I want to know more about that," Graham continued:

"I want to know about your judicial philosophy, because people on the left, the far extreme part of the left, believe that you were the best bet, and I want to know why they reached that conclusion. Maybe there's no explanation you can give us, but let -- we'll -- we'll talk about that."

Graham told the hearing that he's generally inclined to support judicial candidates that "I would not have chosen."

'New game for the Supreme Court'

"And this game is particularly disturbing to me, 'cause there's been a wholesale effort of the left to take down a nominee from my state. And I don't like it very much. And if that's the way the game's going to be played, then I'll have a response."

Graham said Judge Childs would have received at least "60-plus votes" if she were the Supreme Court nominee.

"There have been people in my caucus that would have voted for her, even though we knew she would be a reliable liberal vote, because I and Senator Scott would have stepped up.

"Now we're...facing a choice sponsored by the most radical elements of the Democratic Party when it comes to how to be a judge. They have the most radical view of what a judge should do. And you were their choice. And you will be asked, do you support expanding the Supreme Court? I hope you give us an answer, ‘cause it shouldn't be hard. Either you do or you don't.

“Justice Ginsburg said no. She thought if you just change the number of the court every time somebody new came in power it would ruin the court in the eyes of the public and make it a joke over time. I agree with that. So I hope you can give us an answer to that question. Because I think the court would be better off if the judges stood up for the court. If the judges told politicians don't play this game with the court, 'cause over time nobody wins.”

At the end of his statement, Graham congratulated Jackson on her nomination. “It's going to be a couple of interesting days and we're off to a better start than we have been in the past," he concluded.