Sen. Graham: 'What Did Nancy Pelosi Know and When Did She Know It?' 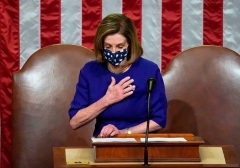 A shaken Speaker of the House Nancy Pelosi (D-Calif.) speaks as the House chamber reconvened after the storming of the Capitol on Jan. 6, 2021. (Photo by JIM LO SCALZO/POOL/AFP via Getty Images)

(CNSNews.com) - If the attack on the U.S. Capitol was "pre-planned," as emerging evidence shows it was, "there's no incitement" by Donald Trump, Sen. Lindsey Graham (R-S.C.) told Fox News's Sean Hannity Wednesday night.

"The FBI and the Capitol Hill police actually now understand this was pre-planned," Graham said.

They were planting bombs the night before. So the whole story line that Donald Trump caused this by the speech has fallen apart due to good law enforcement activity.

And here's what I want to know: What did Nancy Pelosi know and when did she know it? If it was widely known by the FBI and the Capitol Hill police that people were planning to come to Washington before the 6th, to create violence, I want to know, did she know about that?

The whole story line originally was Trump created this from the (Jan. 6) speech. Now we know that people had this on their mind before he ever spoke, so they are playing this bizarre game of trying to get Trump in on it before January 6. This is why you don't want snap impeachments. Evidence really does matter.

Graham said if it were up to him, he'd show videos of Democrat politicians "being silent or encouraging acts of violence.

"I mean, you've got the sitting vice president, when she was a U.S. senator, telling people they're not going to stop, they shouldn't stop, and trying to bail them out.

"So, if I were the Trump team, I would expose the hypocrisy here, and I would go after the argument that it was pre-planned and the idea that the president was in on it is absurd. This thing is collapsing before their eyes, and the not-guilty vote is growing. So it will be over by Sunday, I hope, for the good of the country."

Sen. Graham ruffled tender feathers on the far-left, Trump-hating MSNBC by telling Hannity, "I think most Republicans found the presentation by the House managers offensive and absurd."

(MSNBC's "Morning Joe" Scarborough pounced on Thursday, calling Graham's remark "deeply offensive" and suggesting that Graham and other Republicans were "willing to forgive a terrorist attack against the United States Capitol.")

But here's the rest of what Graham said:

I think most Republicans found the presentation by the House managers offensive and absurd. We all know what happened at the Capitol was terrible. I hope everybody involved that broke in the Capitol goes to jail.

But I don't remember any of these House managers saying a damn thing when they were trying to break into my house and going after Susan Collins and spitting on all of us. If this is a problem for a politician to give the speech that President Trump did, well, then Kamala Harris has a real problem because she actively engaged in bailing out rioters.

And here's what I would suggest. If you are a politician trying to raise bail for people accused of rioting, you are inciting more riots. But here's something that nobody has talked about that's important. If there is -- if there's pre-planning, there's no incitement...

…People said I didn't pay attention today. They're wrong. The managers have got this cockamamie idea, absurd theory, that Donald Trump was monitoring the Proud Boys' website and other far right websites, and that he and Dan Scavino knew this was going to happen and they encouraged it. That is loony tunes.

And do you know why they're saying that? Because if the president didn't know and it was actually pre-planned, he's not guilty. So, for the first time today, they are trying to create a story line that Donald Trump was in on it before it happened, that he was monitoring the Proud Boys and other crazy websites and he knew they were going to come to Washington with the violence on their mind, and he encouraged it.

That is beyond bizarre. This is not evidence. This is a liberal Democratic novel being presented as evidence.