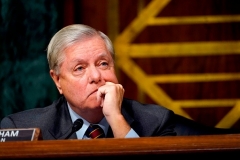 Graham told Fox News's Sean Hannity he plans to introduce legislation to repeal Section 230, a legal provision that protects social media companies from civil lawsuits based on third-party content or for the removal of content.

For example, a number of conservative Republicans, and certainly President Trump, have had their tweets censored or labeled as misleading by Twitter both before and after the election.

"Well, Section 230 allows media -- the big tech companies to take down content and make decisions without being sued, and they're not regulated," Graham said:

There's no business I know of in America, Sean, that can't be sued for their actions and not subject to regulation by the government at any level except Big Tech.

So tomorrow, I'm going to introduce legislation that would repeal Section 230, January the 1st, 2023, which would give the Congress two years to replace it with something better. And if we can't find that something better, it goes away.

And you and "The New York Post" and Ted Cruz and Lindsey Graham can sue these bastards when they try to censor content. And that would be the biggest change in my lifetime regarding Big Tech is to get rid of Section 230.

Mr. President, if you're listening, I've had Democrats come up to me and say, we hate these big tech companies as much as you do. They've abused power. They're American companies. They've created technology that enriches our lives.

But they've got more power than anybody in the history of the world in terms of information flow. They have a political bias. They're protected from lawsuits and they're not regulated by the government. That needs come to an end.

So, Mr. President, if you're watching tonight, tell Congress, you would like a vote on my bill to sunset Section 230 by 2023, so we can replace it or it will eventually die.

Graham also weighed in on the two runoff races in Georgia that will determine which party controls the U.S. Senate:

If we lose Georgia, Bernie Sanders will become the Budget Chairman, not Lindsey Graham. So, your money's at stake.

They will be able to expand the Supreme Court from nine to 13, or a larger number to make it liberal. They will make D.C. a state, adding two more Democratic senators in perpetuity and probably Puerto Rico. They will do away with the legislative filibuster, so the Green New Deal and Medicare- for-All can't be stopped in the Senate. It goes right to Biden's desk.

But the most important thing for the moment here is if we retain control of the Senate, the Hunter Biden fiasco doesn't go away. I do believe the Department of Justice needs to appoint a special counsel to look into the Hunter Biden issues regarding the Ukraine and China. There's already a criminal investigation of him not paying taxes, and he's presumed innocent like every other American.

But if you thought Mueller should be looking at the Trumps and Russia, how do you justify not looking at the Bidens, China, the Ukraine and everything else in the world?