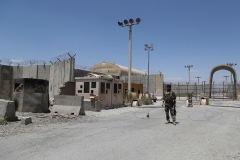 An Afghan National Army soldier stands guard at Bagram Air Base, after all US and NATO troops left, on July 2, 2021. (Photo by ZAKERIA HASHIMI/AFP via Getty Images)

(CNSNews.com) -  Secretary of State Antony Blinken is expected to take tough questions this afternoon when he testifies about the botched U.S. withdrawal from Afghanistan before the House Foreign Affairs Committee, chaired by Rep. Gregory Meeks (D-N.J.).

On Monday, Sen. Lindsey Graham (R-S.C.) was asked what questions he would ask Blinken if he sat on Senate Foreign Relations:

Of the people that we took out of Afghanistan -- how many of them were vetted before they got on the plane? What are you going to do with them? How are you going to vet them, now that we've got them?

Graham noted that when President Trump left office, the United States still controlled Bagram Air Force Base, where 2,500 U.S. troops were stationed. All of them are gone now.

"I want to know from Blinken whose idea was to give it up? We're naked and blind in Afghanistan. Trump had a conditions-based withdrawal plan, we all want to withdraw, but we don't want to leave behind Afghanistan in control by the Taliban and aligned with al Qaeda, which led to the first 9/11.

Graham said that recognizing the Taliban as the legitimate government of Afghanistan would "set in motion a disaster throughout the world."

"They are terrorists," Graham said:

"I'm going to try to introduce legislation naming the Taliban as a foreign terrorist organization. What would I do? I would bleed the Taliban dry. I would wait for the civil war to emerge and it certainly will -- and I would help the people on the other side. I'd make the Taliban's life difficult. I would watch them like a hawk, the best I could, and if I saw any indication of a rise in Al Qaeda, I would act.

"But I would isolate the Taliban.  The Biden administration, I think, is going to embrace the Taliban, which puts Americans all over the world at risk."