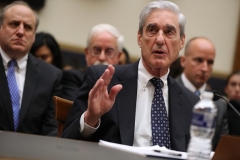 Graham released the following brief statement on Saturday, July 12, after Mueller wrote an op-ed in The Washington Post defending his team's prosecution of Roger Stone, whose sentence President Trump commuted on Friday.

Stone, a friend of Trump's, was convicted of obstructing a congressional investigation, five counts of making false statements to Congress and tampering with a witness. "Because his sentence has been commuted, he will not go to prison. But his conviction stands," Mueller wrote, "and rightly so."

The Trump White House, in a statement announcing the commutation of Stone's "unjust" sentence, said he was unfairly treated as part of the effort to get Trump:

"The simple fact is that if the Special Counsel had not been pursuing an absolutely baseless investigation, Mr. Stone would not be facing time in prison," the announcement said.

"Not only was Mr. Stone charged by overzealous prosecutors pursing a case that never should have existed, and arrested in an operation that never should have been approved, but there were also serious questions about the jury in the case.  The forewoman of his jury, for example, concealed the fact that she is a member of the so-called liberal 'resistance' to the Trump Presidency. In now-deleted tweets, this activist-juror vividly and openly attacked President Trump and his supporters."

The White House announcement added that because of the pandemic, "Mr. Stone would be put at serious medical risk in prison."

In justifying the investigation that bears his name, Mueller wrote an op-ed saying, "I feel compelled to respond both to broad claims that our investigation was illegitimate and our motives were improper, and to specific claims that Roger Stone was a victim of our office. The Russia investigation was of paramount importance. Stone was prosecuted and convicted because he committed federal crimes. He remains a convicted felon, and rightly so."

Russia’s actions were a threat to America’s democracy. It was critical that they be investigated and understood. By late 2016, the FBI had evidence that the Russians had signaled to a Trump campaign adviser that they could assist the campaign through the anonymous release of information damaging to the Democratic candidate. And the FBI knew that the Russians had done just that: Beginning in July 2016, WikiLeaks released emails stolen by Russian military intelligence officers from the Clinton campaign. Other online personas using false names — fronts for Russian military intelligence — also released Clinton campaign emails.

Mueller said he was directed by Deputy Attorney General Rod Rosenstein to examine "any links or coordination between the Russian government and individuals associated with the Trump campaign.

"One of our cases involved Stone, an official on the campaign until mid-2015 and a supporter of the campaign throughout 2016. Stone became a central figure in our investigation for two key reasons: He communicated in 2016 with individuals known to us to be Russian intelligence officers, and he claimed advance knowledge of WikiLeaks’ release of emails stolen by those Russian intelligence officers."

The two-year Mueller probe did not find that the Trump campaign conspired with the Russian government, but Mueller indicated that Stone's lies to investigators impeded efforts to "obtain accurate information."

“Congress will take action to prevent this type of brazen wrongdoing.  Legislation is needed to ensure that no President can pardon or commute the sentence of an individual who is engaged in a cover-up campaign to shield that President from criminal prosecution.

"Roger Stone’s seven felony crimes, which include lying to Congress and witness tampering, constitute grave crimes.  All who commit these illegal acts should be held accountable to the fullest extent of the law."

The president's pardon power is specified in the U.S. Constitution, so it's not clear how Pelosi would get around that with legislation.