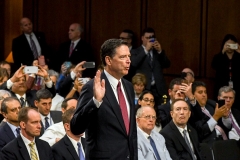 Former FBI Director James Comey is sworn in at a hearing of the Senate intelligence committee on June 8, 2017. (Photo by Mark Reinstein/Corbis via Getty Images)

(CNSNews.com) - In a midnight tweet, President Donald Trump complained, "@CNN doesn’t want to speak about their persecution of General Michael Flynn & why they got the story so wrong. They, along with others, should pay a big price for what they have purposely done to this man & his family. They won’t even cover the big breaking news about this scam!"

"It's pretty apparent to me that General Flynn was a victim of an out-of-control Department of Justice. He basically got railroaded. It's pretty widely known that the Obama administration didn't have much use for General Flynn," Graham said.

These notes reek of criminal misconduct. I trust attorney General Barr to be fair to everybody involved with those being investigated, but his goal, and I know him very well, is to right the ship. Is to restore trust that's been lost. To hold people accountable.

One of the worst things that can happen in any democracy is for those who are in charge of the law to take it in their own hands for political purposes. And I think that's what's happened here. Time will tell.

Rep. Devin Nunes (R-Calif.), the ranking member of the House intelligence committee, noted that Flynn "did not have legal counsel" when two FBI agents came to the White House four days after Donald Trump's inauguration to talk to him.

"They set him up. The whole thing was a set-up," Nunes told Fox News's Laura Ingraham.

Well, clearly, General Flynn's going to have a civil rights case. And I think it's going to cost the government millions of dollars. Secondly, hopefully, there's going to be some prosecutions for this matter. And the judge really has an opportunity here to step in and sanction these lawyers.

And with all of that said, Laura, we brought you this. The House Republicans brought you just a snippet of this information back in 2018. We were mocked. We were told it was a joke. Well, now all of a sudden, you realize what we told you at that time, not only was it true, we didn't even know the half of it.

Even right now, you don't even have the half of it. There is more information coming out the rest of this week. So the evidence is continuing to pile up in General Flynn's favor, which is what we told you and what most of us knew. I've known General Flynn for nearly 15 years. And so the idea that he would be a Russian agent is preposterous.