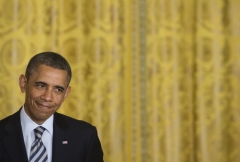 (CNSNews.com) - "The question for us as a Congress is, did the Obama administration use unmasking as a political weapon? That's the question that I want to answer," Senate Judiciary Committee Chairman Lindsey Graham (R-S.C.) told Fox News's Sean Hannity Tuesday night.

Graham said he's "dying to know" why Sally Yates, then the deputy attorney general, did not know about the Gen. Michael Flynn's December 2016 phone calls with the Russian ambassador until she heard about them at a Jan. 5, 2017 meeting with President Obama.

Graham urged Acting Director of National Intelligence Ric Grennell to release the names of the people who made the request to unmask Flynn's name:

"Trey Gowdy asked Samantha Powers, did you make 300 requests to unmask American citizens, and she said, ‘I made nowhere near this number of requests.’ But the NSA in their files have 300, almost 300 requests being made by Samantha Powers. If she didn't do it, who did?" Graham asked.

"You know, I do not know what number of (unmasking) requests I made related to U.S. persons or U.S. entities. I can't tell you what that number is over the life of my time in New York or over the last year. But I can tell you that the number is nowhere near the number that l'm reading in the press."

Powers said she requested the unmasking of names so she could better understand the intelligence she was reading.

Sally Yates 'was so surprised'

According to documents recently filed with the court in Flynn's case (Exhibit 4):

Yates first learned of the December 2016 calls between [LTG Michael] Flynn and [Russian Ambassador to the United States, Sergey] Kislyak on January 5, 2017 while in the Oval Office. Yates, along with then-FBI Director James Comey, then CIA-Director John Brennan, and then-Director of National Intelligence James Clapper were at the White House to brief members of the Obama Administration on the classified Intelligence Community Assessment on Russian Activities in Recent U.S. Elections. President Obama was joined by his National Security Advisor, Susan Rice, and others from the National Security Council.

After the briefing, Obama dismissed the group but asked Yates and Comey to stay behind. Obama started by saying he had “learned of the information about Flynn” and his conversation with Kislyak about sanctions. Obama specified he did not want any additional information on the matter, but was seeking information on whether the White House should be treating Flynn any differently, given the information.

At that point, Yates had no idea what the President was talking about, but figured it out based on the conversation. Yates recalled Comey mentioning the Logan Act, but can’t recall if he specified there was an “investigation.” Comey did not talk about prosecution in the meeting. It was not clear to Yates from where the President first received the information. Yates did not recall Comey’s response to the President’s question about how to treat Flynn. She was so surprised by the information she was hearing that she was having a hard time processing it and listening to the conversation at the same time.

Upon leaving the White House, Yates called Mary McCord, the Acting Assistant Attorney General for the National Security Division at the time to as what was going on and why Yates hadn’t been aware of it previously…Yates learned McCord and (another Justice Department official) had been briefed on the Flynn information by the FBI the day before.

Hannity asked Graham about Yates being "so surprised by the information she was hearing" about Flynn’s unmasked phone call with Kislyak.

"It means that the Obama administration intentionally unmasked a conversation with the incoming National Security Advisor to President Trump. That is stunning," Graham said.

"If I ever find that the intelligence community is unmasking my phone calls with foreign leaders, where I discuss foreign policy as a United States senator, heads will roll.