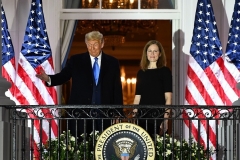 Newly confirmed Supreme Court Justice Amy Coney Barrett joined President Trump on the Truman Balcony after she was sworn in by Justice Clarence Thomas at the White House on Monday, October 26, 2020. (Photo by BRENDAN SMIALOWSKI/AFP via Getty Images)

(CNSNews.com) - The confirmation of Amy Coney Barrett to the U.S. Supreme Court on Monday night adds a "normal person" to the bench who is "going to do an awesome job," Sen. Lindsey Graham, chairman of the Judiciary Committee, told Fox News's Sean Hannity.

To all those conservative women who go through hell for being conservative, who get beat up by the mainstream media for embracing your faith, being pro-life, being traditional in your family structure, you're a winner tonight. There's a seat at the table for you.

This is not a glass ceiling being broken. This is a concrete barrier being broken. Amy Barrett represents every aspiration of a young conservative woman. She is going to do awesome. I cannot wait for her to be on the Supreme Court tomorrow.

Graham called it a "great night for conservatism," admitting that "I haven't slept in two weeks."

"I've been fearful of a Kavanaugh moment," he admitted.

“To my Senate Judiciary Republicans, thank you. I've been living in fear and it's now over. She's on the court. Mission accomplished. The left is going nuts tonight."

While Graham celebrated Barrett's confirmation, at the same time, he warned that "the Internet is on fire tonight" with angry liberals raising money for Democrat candidates, including Graham's own opponent who has raked in a staggering $109 million.

The aim of leftists it to regain control of the Senate and the presidency and add to their numbers in the House.

"Let's all fight back together," Graham said.

He warned that court-packing is on the agenda if Democrats control the government:

OK, number one, they're going to take the number nine and expand it to probably 13, to wipe out the conservative majority. They'll pack it with liberals. That means the court loses its independence.

They'll do away with the legislative filibuster. They're going to do away with the Electoral College, which means New York and California pick the president in perpetuity. Iowa, South Carolina and Arizona won't count any more.

They're going to have open borders and free health care for illegal immigrants. All of them raised their hands.

They're going to turn this country from a free enterprise nation to a socialist nation, from a law-and-order nation to chaos. They will reward the most radical agenda in the history of the country, that's trying to take us all out.

Now, we got a chance here to make history. Can you imagine four more years of President Trump?