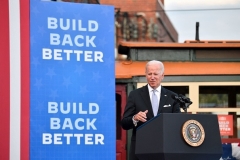 Democrats, including President Joe Biden, are lying about the true cost of their "Build Back Better Act," says Sen. Lindsey Graham (R-S.C.). (Photo by NICHOLAS KAMM/AFP via Getty Images)

(CNSNews.com) - Democrats have put a $1.75 trillion price tag on their "Build Back Better Act," which they insist is "fully paid for."

No, it's not, Sen. Lindsey Graham (R-S.C.) told "Fox News Sunday." He pointed to a Congressional Budget Office estimate that says the entitlement programs established in the bill, if they run for ten years instead of just two or three, would cost close to $5 trillion:

Democrats, to bring down the cost of their social agenda bill, gave some of the entitlement programs a short shelf life, fully anticipating that once established, they will never go away.

Vice President Harris said it was paid for. Schumer, Pelosi, Secretary of Treasury Yellen. The CBO says it's not paid for. It's $3 trillion of deficit spending. It's not $1.75 trillion over 10 years, it's $4.9 trillion.

What does this mean? The House should re-vote. The vote in the House was based on a fraud. This bill doesn't cost $1.75 trillion, it costs almost $5 trillion. It doesn't add $300 billion to the deficit, it adds $3 trillion.

There is not a plan to pay for it. If there is, I missed it. So, give it to me. Give it to the American people. Before we vote in the Senate, show me how you pay for this bill.

And you know why I wrote a letter to CBO, because Joe Manchin came to me and he said, I think this bill is full of gimmicks, that these programs won't go away, Lindsey, and if you score them for 10 years, I think the bill will double. Well, it didn't double, it was almost 2.5 times.

So, I hope that this will be a showstopper for Build Back Better.

Graham defended the Trump-era tax cuts passed by Republicans, which were not paid for at all, as Democrats like to point out:

"I like giving money back to the taxpayer. I don't like spending more money than we did in World War II. And that's what we're doing right now."

Graham said he voted for the tax cut because he opposes government expansion, which is exactly what BBB would do:

"This bill, Build Back Better, it's $5 trillion. It's not 1.75. It will add $3 trillion to the deficit. When they tell you the bill is paid for, their lying. When Nancy Pelosi brought it to the House with the CBO score of 1.75, it was a lie. When she said it was $300 billion to the deficit, is was a lie.

"They're telling you it doesn't cost anything, Chris. Well, the CBO says it costs $3 trillion.

"Joe Manchin, if you're watching, you were right, Joe. You got this right. It is a lie. It's $4.9 trillion, not 1.75...Now, what the hell are you going to do about it? If you say it's going to be paid for, give me the offsets. Do you raise taxes by $3 trillion? Do you cut the government by $3 trillion?" Graham asked.

Manchin has expressed reservations about BBB, and without his vote, the bill cannot pass the Senate.