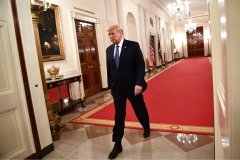 President Donald Trump walks through the East Room of the White House on July 22, 2020. (Photo by BRENDAN SMIALOWSKI/AFP via Getty Images)

(CNSNews.com) - President Donald Trump occasionally jokes -- jokes -- about extending his two terms in office. He said he does it to "drive the media crazy."

More recently -- and much more seriously -- he has questioned the integrity of vote-by-mail in states that automatically send ballots to all registered voters.

Sen. Tammy Duckworth (D-Wis.) told CNN on Friday, if President Trump does not accept the election results, "We will make sure that he is escorted out of the White House at the end of his term. Period."

CNN's Alisyn Camerota asked Baldwin, "And just tell me, what would that look like?"

"I don't know," Duckworth said. "You know, we'll -- we'll – we’ll plan for it, and we'll look and see what needs to happen. But we have a democracy. It is tin pot dictators, you know, the likes of Saddam Hussein and Moammar Gadhafi that don't accept elections or try to rig elections, and that is not acceptable in the highest office of this land of the free, and we're not going to let Donald Trump do this."

In an interview with Fox News's Sean Hannity Thursday night, Trump was asked if he's going to have poll watchers to "avoid fraud."

"We're going to have everything," Trump responded:

I mean, you have some of these states sending them out, like Nevada, where they don't even have to check the signature so anybody can sign it. New Jersey just sent them out -- where the governor, as I understand it, just signed an executive order -- didn't even go through the legislature -- to get it done. And nobody has ever heard of anything like this.

So they're going to be sending out 51 million ballots to people -- they have no idea why it's coming, who it's going to. Unfortunately, they may have a very good idea the people sending them. They may send them to all Democrat areas, not to Republican areas, as an example.  It could be the other way too, but I doubt it. So it's a very serious problem. And you know, the other thing, a lot of times you don't even have to send it back until after the election.

Now he's going to try to intimidate Americans and keep them from exercising their right to vote. It is shameful. It is shameful that this president of the United States would actually be doing this, because he's so afraid of losing the election. And you know what? We're going to do everything we can to stop him and make sure that Americans do exercise the right to vote. It is not on Donald Trump to decide, you know, whether or not the election should go on.

This past Monday, Trump told a rally in Wisconsin, "the only way we're going to lose this election is if the election is rigged.”

On Wednesday, a reporter asked White House press secretary Kayleigh McEnany about that: "Is the President saying if he doesn’t win this election, that he will not accept the results unless he wins?"

"The President has always said he’ll see what happens and make a determination in the aftermath," McEnany said. "He wants a free election, a fair election, and he wants confidence in the results of the election, particularly when you have states like Nevada doing mass mail-out voting to their voting rolls."

'These people are crazy'

For what it's worth, here are some of Trump's jokes about extending his term beyond the legal two:

A year ago, in August 2019, President Trump told reporters outside the White House, “Let me tell you. In six years –- or maybe 10 or maybe 14, right? –- in six years, when I’m not here, the New York Times goes out of business very quickly.”

The following November, Trump told a rally in Lexington, Ky., "Look at all these people back there, look. Fake news media. It’s the fake news. Look at all of them. What they don’t know is that when we hang it up in 5 years or 9 years, or 13 years, or maybe 17 years, or maybe if I still have the strength, 21 years. See, now they’re going crazy. Now they’re saying, see, I told you, he was a dictator. He wants to take charge in control of our country. These people are crazy."

"No, but these people are going crazy. When they all scream, 'Four more years, four more years,' I always say, 'Make it 12 years, and you’ll drive them crazy.' Twelve more years."