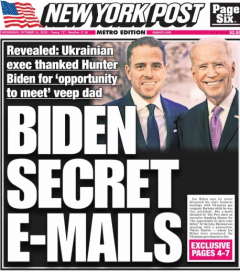 The cover of The New York Post on Oct. 14. (Screen capture)

And we're two weeks out from an election. When this evidence of potential corruption comes out, what happened next was stunning because Big Tech, Twitter and Facebook, decided they didn't want the American people to hear this.

And so, if any American across the country tried to tweet these stories out, tried to post these stories, Big Tech blocked the stories. And in fact, they went so far as to block "The New York Post," a major media company, from posting their own stories.

And as bad as Big Tech censorship and bias has been, last week marked a major threshold -- it's the first time they've directly stepped in and said to the media, we are going to censor you, and if we don't like what you are saying, the American people don't get to hear it, and you don't get to say it.

The New York Post reported last week that "Hunter Biden introduced his father, then-Vice President Joe Biden, to a top executive at a Ukrainian energy firm less than a year before the elder Biden pressured government officials in Ukraine into firing a prosecutor who was investigating the company."

Another email from May 2014 shows the Burisma executive asked Hunter for “advice on how you could use your influence” on the company’s behalf.

The Post also reported that "Hunter Biden pursued lucrative deals involving China’s largest private energy company — including one that he said would be 'interesting for me and my family.'"

An email sent to Biden on May 13, 2017 mentioned a business venture with a Chinese energy company. That email outlined a “provisional agreement” to "distribute the equity" -- with 80 percent of the shares to be split among four people, 10 going to another person, and then, in question form -- "10 held by H for the big guy?" Fox News said it has confirmed that the "big guy" is Joe Biden.

"It's Joe Biden that has potential corruptions with Ukraine, and he has repeatedly denied that he ever met with Ukrainian oligarchs. And yet these emails suggest that he has. And then the next day, "The New York post" broke a second-story about what appears to be the potential for direct corruption between Joe Biden and Communist China. And in particular, an offer from communist China to pay Joe Biden personally millions of dollars. These emails referred to Joe Biden as quote, 'the big guy.'"

As a result, Cruz and Sen. Lindsey Graham announced that the Senate Judiciary Committee will vote this week to subpoena the CEO of Twitter "to come testify before the election and explain what the hell he is doing. Why they are interfering with the election, why they are trying to censor the press," Cruz said.

"And we are going to get Twitter and I believe Facebook both, Jack Dorsey and Mark Zuckerberg, to testify in front of the Senate Judiciary Committee. And we need answers before the election, because this is dangerous. It's a real threat to free speech, it's real a threat to our democratic process."

If, God forbid, Joe Biden and the Democrats win, there's going to be no accountability, this will all be swept under the rug. And social media will get even greater. And listen, whatever you think, whether you agree with their politics or not, who in their right mind would want a bunch of Silicon Valley billionaires deciding who gets to speak and who doesn't and what reporter gets to write something and doesn't.

They are censoring -- you know, "The New York Post" has the fourth highest circulation of any newspaper in America. It's over 200 years old and it was founded by Alexander Hamilton. And by the way, the Democrats talking point on this, they say well, this is Russian disinformation.

Instead, he's hiding in the basement, and the press ought to do its job and we ought to have free speech. You know, you mentioned my book "One Vote Away." There's an entire chapter in "One Vote Away" about free speech and how today's Democrats want to take away our free speech rights and give government the power to censor citizens they disagree with. That's really scary.