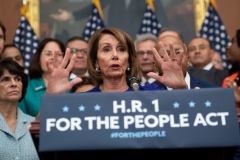 Speaker of the House Nancy Pelosi joins fellow Democrats in introducing H.R.1, the "For the People Act," that is aimed at consolidating Democrat political power in this country. The bill is a Democrat priority, introduced on January 4, 2019. (Photo by SAUL LOEB/AFP via Getty Images)

(CNSNews.com) - The U.S. Senate on this Tuesday will take up a bill that Democrats call the "for the people act," and Republicans call "the corrupt politicians act."

HR-1, or S-1 in the Senate, would eliminate state voter ID laws, expand universal mail-in balloting and ballot harvesting, among other provisions to exert federal control over elections that are run by the individual states.

Sen. Ted Cruz (R-Texas) said he considers S-1 "the single most dangerous piece of legislation before the United States Congress."

"You know, there's kind of two buckets of what the Democrats are trying to do," Cruz told Fox News's Sean Hannity Monday night:

One is bad policy. Things like massive new taxes, massive new spending, massive new regulations, all of those are going to hurt Americans all across the country. But there's a second bucket that is really rigging the game, trying to change the rules so they never lose again.

And the crown jewel of the rigging-the-game proposals is the corrupt politicians act. Tomorrow in the Rules Committee in the Senate, we're going to have a markup. I've got 46 amendments I've introduced that I'm going to force Democrats to vote on, one after the other after the other. Because you're right, what this bill does, it's a massive federal takeover of elections all across this country.

It strikes down almost every voter integrity law that's ever been adopted in the states. So, for example, 29 states require voter ID. It's a very reasonable common sense provision. The corrupt politicians act strikes all of those laws down. Thirty-one states prohibit vote harvesting, prohibited paid operatives collecting other people's ballots and potentially stealing those votes. This bill strikes all of those provisions down.

This bill turns the Federal Election Commission into a partisan weapon to fine, to prosecute, to sue Republicans. It gives Chuck Schumer a federal agency as an attack dog.

And not only that, this bill is welfare for politicians. It provides a federal match of six to one. If a candidate raises money for a campaign, the federal government matches at six to one, which would give hundreds of millions of dollars to politicians because, Sean, as you look at needy populations in America, it's hard to think of a group more needing of federal funds than politicians. And, by the way, they can pay their own expenses out of this.

This is a -- it is a massive Democratic power grab and it's because the number one priority of Joe Biden, of Chuck Schumer and Nancy Pelosi is to stay in power for a hundred years and to steal the rights of the voters to vote them out.

I am leading the fight against this. It is the single most dangerous thing in the Congress right now.

Cruz said the only way Democrats will be able to pass the "corrupt politicians act" is if they can convince two Democrat senators -- Joe Manchin of West Virginia and Krysten Sinema of Arizona -- to scrap the filibuster. That would allow bills to pass the Senate with a simple majority instead of the currently required 60 votes for most legislation.

"And if they do that, four left-wing justices will vote to uphold the corrupt politicians act and keep Democrats in power forever. This is all about rigging the game and stealing your right to vote. It's saying to the voters, you can't vote the bums out, no matter how much damage they do to the country."

Cruz said if Manchin and Sinema do "cave under Chuck Schumer's pressure," Republicans should "use every tool we can."

"We should deny unanimous consents. We should deny a quorum. I can tell you, most Republicans are agreed. I don't know if we get all 50. I'm going to do everything I can to make the case, and I hope we do. Right now, there's not a Republican in the conference arguing the other side.

"That might change. But at least right now, we have a united front. I hope that remains that way because if not, tax increases we can undo in two years or four years. Changing the rules fundamentally is designed to rig the system for a century to come and with every -- every breath in my body I'm going to fight against it," Cruz said.