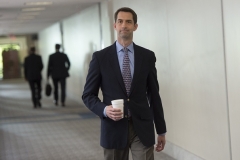 (CNSNews.com) - Sen. Tom Cotton (R-Ark.) blames China for spreading the COVID-19 virus all around the world, and he advocates strong punishment for the communist state.

On Thursday, Cotton questioned the wisdom of allowing "hundreds of thousands of Chinese students to come to our universities."

And not just the American people, by the peoples of our allies all around the world. So you've seen in Japan, for example, (Prime Minister) Shinzo Abe proposed billions of dollars to help bring manufacturing (in) China back to Japan. We should pursue a similar set of policy objectives here in the U.S., bringing back our manufacturing base, especially pharmaceutical and medical manufacturing base.

I think we should continue on to other critical fields like telecommunications. China has gotten rich for 30 years off of our manufacturing base. That would be a hammer blow to their economy.

We can open up the American court system so Americans who've been grievously harmed by this virus, we will sue Chinese officials.

We can stop allowing hundreds of thousands of Chinese students to come to our universities, many of which are the children of Chinese Communist Party officials. And those things are just the tip of the iceberg in the consequences China must pay.

Cotton noted that he has introduced legislation aimed at China since the pandemic started, but even before that, he said he worked with both Democrats and Republicans to "stop China's ambitions from replacing the United States as the preeminent power in the globe."

When the Senate reconvenes on May 4, "I expect you will begin to see a lot of action trying to check China's ambitions, trying to make them pay the consequences for unleashing this pandemic on the world, and holding them accountable for tens of thousands of Americans who have died because of their negligence and malevolence," Cotton said.

The senator has authored or co-authored numerous bills in an attempt to curb China, including:

--A bill that would dramatically increase investment ($43 billion in total) for military infrastructure, weapons, and other assets in the Indo-Pacific region to halt China's goal of pushing the U.S. out of the Western Pacific;

-- A bill that would allow Americans to sue China in federal court to recover damages for death, injury, and economic harm caused by the Wuhan Virus.

-- The "Protecting our Pharmaceutical Supply Chain from China Act."

Cotton is urging the U.S. to "unsign" the Comprehensive Nuclear Test Ban Treaty, because China is cheating. And he wants the Federal Communications Commission to revoke and terminate China Telecom (Americas) Corp.’s authority to provide telecommunications services to and from the United States.

"If China had been up front from the very beginning, been honest about their number of cases, ICU hospitalizations and deaths, then the rest of the world might've had its guard up earlier," Cotton told MacCallum.

"Some studies have suggested we might have cut cases anywhere from 65 percent to 90 percent all around the world if China had been honest from the very beginning."