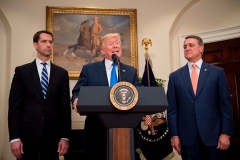 Sen. Tom Cotton (R-Ark.), seen here to President Trump's left, was an early supporter of the president, although the relationship frayed over Trump's election fraud claims. (Photo by JIM WATSON/AFP via Getty Images)

(CNSNews.com) - U.S. Senators will be sworn in as jurors on Tuesday to hear the single "incitement to insurrection" charge against former President Donald Trump, now a private citizen. The actual impeachment trial is set to begin on February 8.

The impeachment power is designed to convict and remove office holders from office. The Constitution explicitly says it applies to the president, the vice president, and civil officers.

Now Donald Trump is none of those. He is a private citizen, and I think most Americans are going to think by the middle of February, it's very strange that the Senate is spending it's time trying to convict and remove from office a man who left office almost a month ago. There are many other pressing priorities on which we could be focused.

Cotton said "more and more" Republicans have told him they agree -- "that this is beyond the constitutional authority of the Senate to conduct a trial to convict and remove from office a man who left office last week."

Baier reminded Cotton that he incurred the wrath of President Trump, who tweeted on January 4: "How can you certify an election when the numbers being certified are verifiably wrong." Trump, aiming the tweet “@SenTomCotton,” said, “Republicans…NEVER FORGET."

"And just like it's beyond Congress's power to reverse the results of the Electoral College, it's beyond our power to proceed with an impeachment proceeding after the impeached official has left office.

"I -- I don't think so much about the politics of this question, as faithfulness to the Constitution," Cotton said.

Asked if President Trump "incited" the mob that attacked the Capitol, Cotton responded:

Bret, the president called forth a crowd on January 6, and for many weeks he had been saying that there was some chance to reverse the results of the election and extend him a second term. That simply wasn't going to happen.