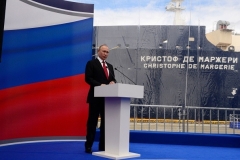 (CNSNews.com) - Oil and gas are Russia's two largest exports, Sen. Tom Cotton (R-Ark.) said on Thursday, but the Biden administration has deliberately excluded Russia's energy production from the sanctions it imposed on Thursday.

As a deputy national security adviser put it on Thursday: "Our sanctions are not designed to cause any disruption to the current flow of energy from Russia to the world."

It's a mistake to keep paying Russia for its oil and gas, Cotton indicated, noting that Joe Biden's reckless energy policies already have driven up the price of oil and gas over the last year.

The Biden administration "is admitting they don't want to impose oil and gas sanctions on Russia because they're afraid it's going to add to the inflation they've already created," Cotton told Fox News's Laura Ingraham:

"Well, how about we impose those sanctions, but we lift all those restrictions on the production of American oil and gas so we can start drilling on federal lands again and putting out new leases and reopen the Keystone pipeline, which would bring more oil into America every day from Canada than we import every day from Russia. That's what we should be doing."

Kerry said he fears the war will divert (presumed) attention away from climate change: "So, I hope president Putin will help us to stay on track with respect to what we need to do for the climate," Kerry said on Wednesday.

"Those are the rantings of a deluded ideologue," Cotton said.

"Most Americans are not ideological about these matters. They're clear-eyed, they're sober, and they understand that you should not disarm your own energy production when a brutal dictator uses energy as a weapon against our partners -- and then invades an innocent nation and creates some of those scenes that you played earlier of children screaming and families scrambling into subway stations.

"Most Americans understand, it's basic common sense that we want to be able to protect our own energy supply, and hopefully supply Europe the energy it needs to get off of Russian energy."